Here comes the return of travel restrictions for COVID 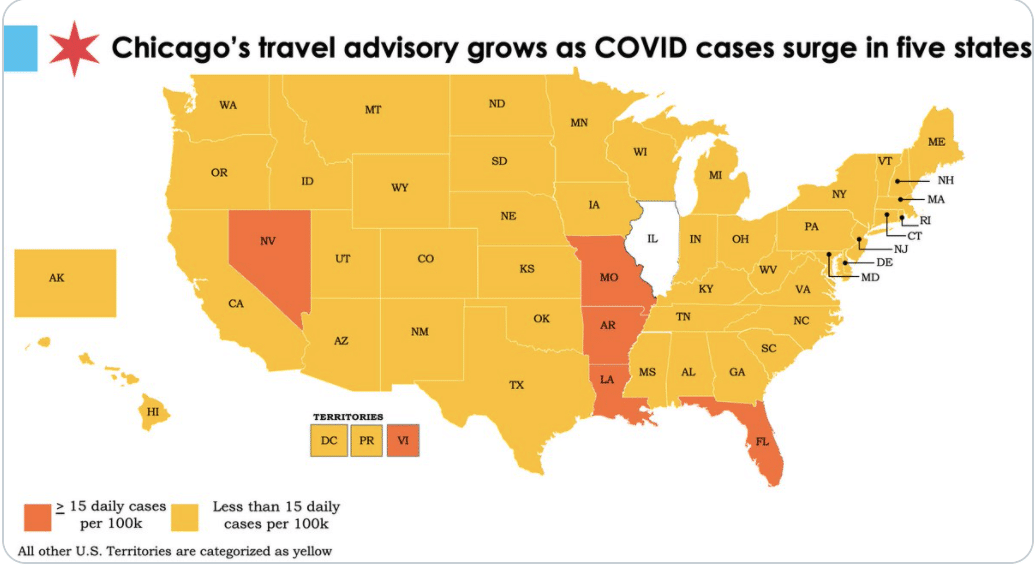 Chicago is trying to quash an uptick in COVID cases thanks to the delta variant while preparing to welcome thousands of people downtown for Lollapalooza,

“We want to get ahead of this before we see truly a second surge,” Mayor Lori Lightfoot said. The mayor and Chicago’s top doctor issued their warning as three more states were added to Chicago’s travel advisory Tuesday.

Florida, Louisiana, and Nevada have all been added to the advisory because they surpassed the mark of 15 cases per day per 100,000 residents. The U.S. Virgin Islands have also been added to the list. Missouri and Arkansas, which were added back onto the travel advisory a week ago, remain on the list.

The city’s emergency COVID-19 travel order was changed to an advisory on June 29. The change was a result of a third consecutive reporting period where no U.S. states or territories have recorded 15 or more COVID cases per day per 100,000 residents.

Unvaccinated people traveling from these states or territories are advised, but not required, to get a negative COVID-19 test result no more than 72 hours before arriving in Chicago, or to quarantine for 10 days upon arrival. Before last week, no states had been in the Orange Tier since May 18, 2021. Any states or territories with fewer than 15 cases per 100,000 residents per day are in the Yellow Tier. READ MORE