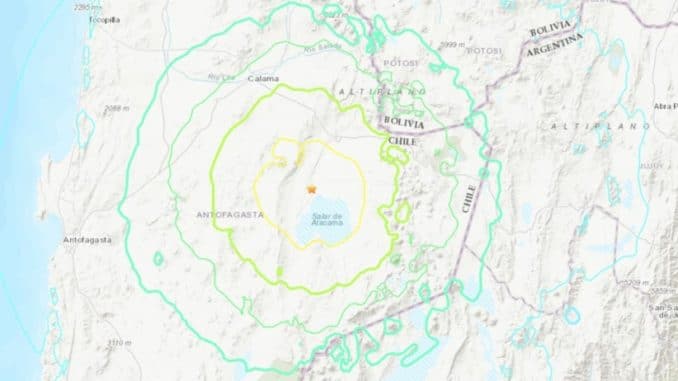 (ETH) – Northern Chile has reportedly been shaken by a magnitude 6.8 earthquake according to the Santiago Times. The earthquake struck early on Wednesday morning, 62 km South-southwest of San Pedro de Atacama, Chile at a depth of 145 km (90 miles).

At this time there are no immediate reports of casualties or damage from the quake. Chile is a region known for earthquakes, which are produced by the fast-moving Nazca tectonic plate colliding with the South American plate.

Chile witnessed its most powerful quake in recorded history in May 1960, when it was struck with a quake 100 miles off the Chilean coast and was thought to have measured a stunning 9.5 on the Richter Scale. The mega-quake produced much damage to many cities and more than 1,500 deaths and a devastating tsunami resulting in two million people being left made homeless by the disaster.