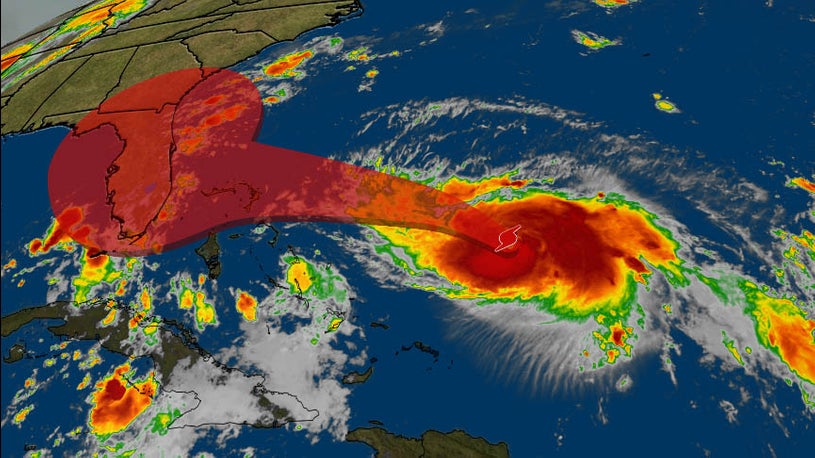 (Yahoo) – Gas stations in parts of Florida are running out of fuel as drivers race to fill up ahead of Hurricane Dorian. Independent operator Steil Oil, just 3 miles from the Atlantic Ocean in Vero Beach, Florida, closed but there was no sense of panic, said clerk-attendant Doug Mull. Several dozen drivers stopped in while pumps were closed. Another 8,000-gallon gasoline carrier was on the way, he said. Dorian’s course turned slightly south and is now expected to make landfall near Jupiter, Florida, as a
Category 4, with winds reaching 140 miles per hour. Florida relies on ships to bring in most of its fuel, leaving the state vulnerable to shortages if ports are closed. “Sure a few people were angry, but they all came back,” Mull said. “We just go with the flow around here. I think it will get pretty busy soon.” Vero Beach isn’t far from the Orlando-Daytona Beach-Melbourne area, where GasBuddy estimated 31% of retail gasoline sellers were dry as of Friday morning. The pinch was tightest in West Palm Beach where 50% are out of fuel. MORE

(CBSMiami) – Florida is in a state of emergency as it prepares for Hurricane Dorian to make a possible Labor Day landfall. Officials are pleading with residents to get ready now and not wait until the last minute. Across the state, store shelves are emptying. “I bought a lot of tuna fish, and potato chips and peanut butter and jelly and lots of water,” said Broward resident Carol Brafman. Dorian pounded the US Virgin Islands as a category one hurricane and is now forecasted to reach Florida this weekend. “Have a plan, be ready and listen,” said Governor Ron DeSantis who urged all Floridians to stock up on seven days worth of supplies. Some tourists in Daytona Beach are deciding whether to get out of town or hunker down. “I think we’re going to ride it out unless it’s something crazy, you know like a three or four, absolutely not,” said Joey Gower, who is visiting from Quincy, Illinois. Local business leaders said they understand if they leave. “Why would you want to come to a hotel with two kids and be trapped for three days, you could stay home and listen to them scream,” said Bob Davis, CEO and president of the Lodging & Hospitality Association of Volusia County. MORE