DEVELOPING: New tropical depression forms off the coast of Florida… 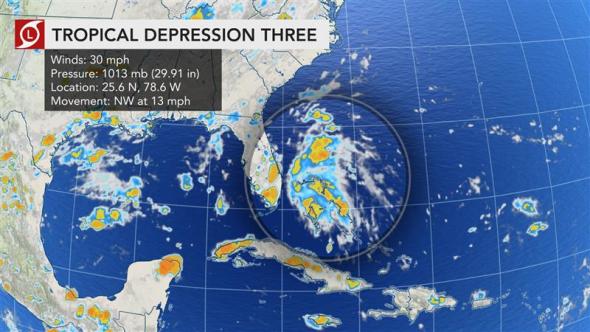 (AccuWeather) – A concentrated batch of downpours and thunderstorms churning near the eastern Bahamas strengthened into Tropical Depression 3 late Monday afternoon, as AccuWeather Meteorologists predicted. The storm formed close to the coast of Florida, approximately 120 miles southeast of West Palm Beach, Florida, and was moving northwest at 13 mph, according to The National Hurricane Center. If the Tropical Depression strengthens into a tropical storm, it would be named Chantal. Even if a named storm fails to take shape,

the front will bring an extended stretch of increased showers and thunderstorms to the Florida Peninsula later this week. The Atlantic basin has been quiet since Barry slammed onto the Louisiana coast as a hurricane on Saturday, July 13. Tropical Depression 3 will track northward just off the eastern coast of Florida on Monday night and Tuesday morning before turning to the northeast and paralleling the coast of the Carolinas later Tuesday into Tuesday night. READ MORE