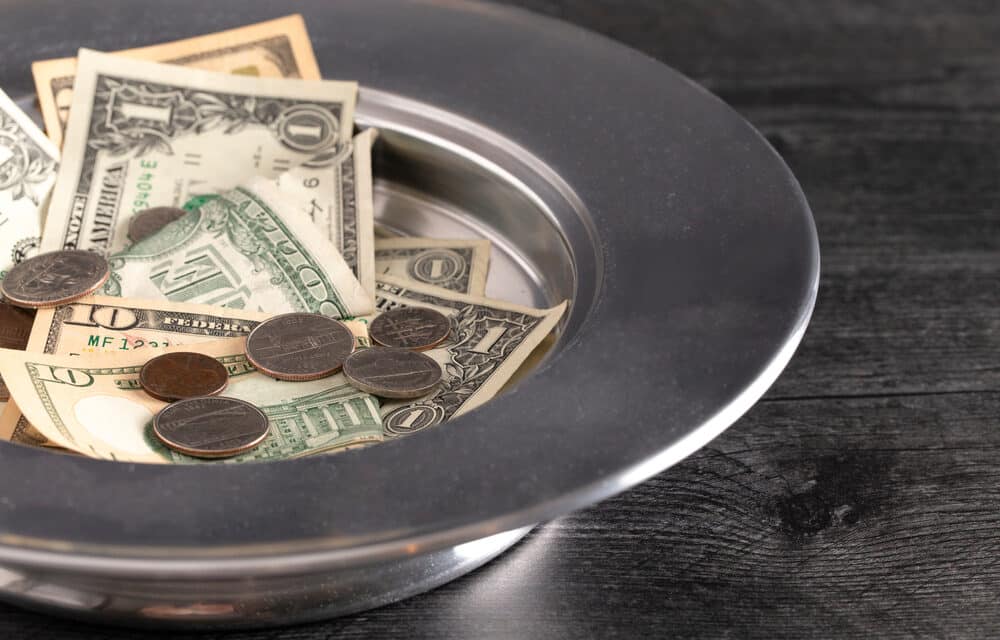 (OPINION) While many Christian churches encourage tithing — giving 10% of one’s income to the church — as a biblical commandment, only a minority of pastors subscribe to that traditional view, data from a new Barna study show.

The data in Revisiting the Tithe & Offering, the latest release in Barna’s The State of
Generosity series published in partnership with Generis and Gloo, found that only a minority of Americans who identify as Christian give 10% of their income to the church in practice too.

Researchers surveyed 2,016 U.S. adults from Nov. 12-19, 2021, to arrive at the most recent conclusion showing no consensus among pastors on the practice that has been renounced by high-profile pastors such as televangelist Creflo Dollar in recent months.

While most pastors in the study don’t see giving outside the church as tithing, 70% said tithing doesn’t have to be strictly financial. And when it comes to how much financial giving would be an acceptable tithe, only 33% are in favor of the traditional 10%.

Among Christians, in general, less than half could say definitely what the tithe is. More than half of practicing Christians, 59%, had a stronger awareness of the tithe and what it means, while 99% of pastors understood the traditional concept.

The study further noted that only 21% of Christians were found to give 10% of their income to their local church while 25% didn’t give to their church at all. Among practicing Christians, the study found that 42% gave at least the traditional 10% to their church.

“Church leaders and Christians may wonder whether it matters if the tithe falls out of the mainstream. After all, church giving should not be reduced to an equation, and heartfelt, reverent generosity can be accomplished with or without deep knowledge of the tithe,” Barna noted. “Still, as a fundamental, scriptural idea of Christian stewardship becomes a hazy concept, it appropriately raises questions — about how modern ministries approach funding and resources, and, more importantly, about the broader culture of generosity being nurtured among Christians.”

A recent study showed that only an estimated 13% of Evangelicals engage in traditional tithing and half give less than 1% of their income annually. The study, “The Generosity Factor: Evangelicals and Giving,” from Grey Matter Research and Infinity Concepts, a brand communication agency, shows that the average Evangelical gave $1,923 to the church and $622 to charity over the past 12 months, for a total of $2,545 in giving. At the median mark, however, Evangelicals only gave $340 to the church and $50 to charity, for a total of $390.

The study found that people who were more engaged with their church and faith tended to give more to their church, and vice versa. In July, controversial televangelist Creflo Dollar, one of America’s most flamboyant proponents of the prosperity gospel, renounced tithing and all his previous teachings on the subject as “not correct.” READ MORE