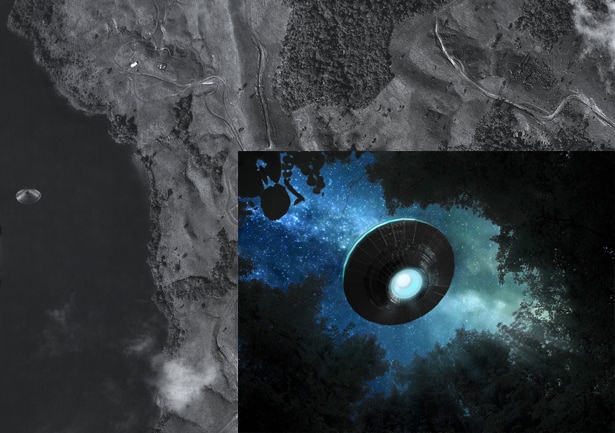 (OPINION) A new high-resolution print of what has been called “the most convincing UFO photo ever” has been released 50 years after it was first taken according to a new report from the Daily Star.

Aerial photographer Sergio Loaiza was using a 100lb map-making camera as he flew over Costa Rica on a mission to survey land ahead of the construction of a hydroelectric project near the Arenal Volcano in the South American country’s northern highlands. As he flew over Lake Cote at an altitude of around 10,000 feet, Loaiza took multiple high-resolution black and white photos of the lake and surrounding rainforest at 20-second intervals.

In one frame, time-stamped at 8:25 am, a shiny metallic disc – a classic alien “flying saucer” can be seen apparently flying between Loaiza’s twin-engined Aero Commander F680 aircraft and the ground. Black and white photographs were snapped at 20-second intervals, and in one frame a strange object could be seen hovering over Lake Cote at 8.25 am local time.

Studies of the image were conducted by Costa Rican UFO researchers Ricardo Vílchez, Dr. Richard Haines, and Dr. Jacques Vallée, who all concluded the image was not the result of double exposure or a deliberate fabrication. A high-resolution version of the image has now been released by Esteban Carranza, a citizen of Costa Rica who describes himself on Twitter as a ‘UFO Enthusiast’.

According to UAP Media, Carranza obtained a ‘contact’ copy of the original image from his late uncle, who passed away last year. The uncle had previously obtained the image in the late 1970s or early 80s from the National Geographic Institute. Carranza sent the negative to the Michael Strickland Photography photo laboratory in Kansas, where a Tango Drum Scanner was used to produce a very high-quality scan of 1.7GB in size.