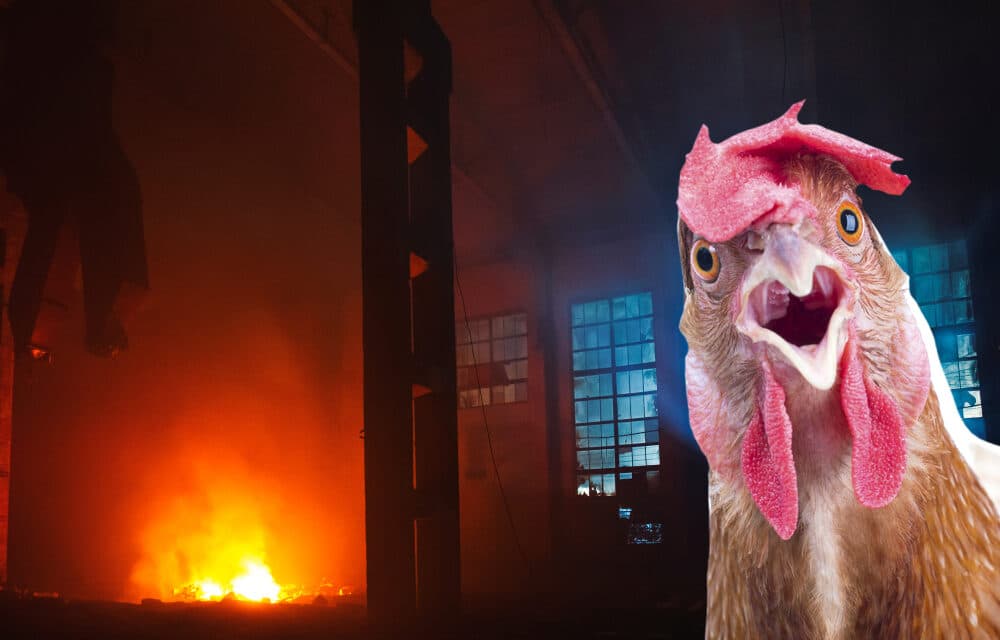 (OPINION) We are supposed to believe that what we are witnessing is just one “tragic accident” after another. We aren’t supposed to see any sort of a pattern, and we aren’t supposed to ask any questions. Last month, I wrote an article about 16 mysterious fires that have happened at important food industry facilities in the United States since the start of 2022. Unfortunately, this trend has continued since that time. In fact, there have been more “accidental fires” in recent days, and I believe that the American people deserve some answers.

On Saturday night, a “massive” fire erupted at a commercial egg farm in Minnesota. We are being told that the structure that burned down contained “tens of thousands of chickens”… Massive flames burned down a barn with tens of thousands of chickens in Wright County. The fire started late Saturday night at Forsman Farms in Howard Lake, causing major damage.

Like so many of the other mysterious fires that I have reported on, this fire grew to an absolutely enormous size very, very rapidly… The Trebesch family thought they would spend Saturday night around their bonfire, but just after 10 p.m., they noticed massive flames across the field at Forsman Farms.

“It was unbelievable how quick it grew, it was insane,” Andy Trebesch said. “It was the whole sky, it was quite large.” We are being told that there was no foul play. Just another senseless accident. Nothing to see here. Of course, the same explanation is being given for a “dramatic fireball” that burned a grain silo to the ground in Washington state just a few days ago…

A spectacular fire demolished M & E Seed and Grain Co. in Prosser and left one person with burns. A smoldering pile of twisted metal and charred lumber was all that remained Thursday morning after firefighters battled the blaze in downtown Prosser all night. A few firefighters remained at the scene to monitor the fire. They are assuring us that this sort of thing happens all the time.

So don’t try to apply common sense to any of this, because that will just confuse you. A few days before that tragedy in Washington state, 43 rail cars that were carrying much-needed potash derailed in Alberta…About 43 westbound Canadian Pacific (CP) Rail cars carrying potash derailed northeast of Fort Macleod, Alta., Sunday morning, RCMP say.

At 8:15 a.m., Mounties responded to a train derailment between Range Roads 251 and 252, near Highway 3. Fire crews and CP Rail also came to the scene, according to police. So what are Canadian authorities telling us about this incident? You guessed it! Apparently, it was just another “accident”.

People sure are getting careless these days, because “accidents” just keep happening time after time after time. And all of this is taking place at a moment in history when we are being told that we are about to enter an absolutely horrifying global food crisis. During recent testimony in front of the UN Security Council, the CEO of Gro Intelligence warned that “the lowest grain inventory levels the world has ever seen” are getting even lower…

Menker said estimates from official government agencies from across the world show that wheat inventories at 33% of annual consumption, but added that models created by Gro Intelligence show that the figure may actually be closer to 20%, a level not seen since 2007 and 2008.

“It is important to note that the lowest grain inventory levels the world has ever seen are now occurring while access to fertilizers is highly constrained,” she said. “And drought in wheat-growing regions around the world is the most extreme it’s been in over 20 years. Similar inventory concerns also apply to corn and other grains.”

In other words, there isn’t going to be enough food for everyone. As I noted yesterday, we are being told that one-fifth of the entire population of the globe could soon descend into poverty and hunger… For months, the specter of a global hunger crisis has been looming. The war in Ukraine is a compounding factor, blocking key value chains for food and fertilizer just as the world reckons with the impacts of the COVID-19 pandemic on global hunger.

Add the pervasive effects of climate change to the mix, and the result is what the United Nations is calling a “perfect storm” that risks one-fifth of the global population – as many as 1.7 billion people – falling into poverty and hunger. I am not the one saying that one-fifth of the global population is heading into poverty and hunger. It is the United Nations that is saying this.

Of course, it is quite true that I have been warning that a “global famine” was coming for a very long time, and now it is here. David Beasley, the head of the UN World Food Program, says that his organization is already taking food away from the hungry to feed the starving.

So what is he going to do when countless millions are starving all over the planet? Global trends have been pushing us in this direction for years, but now the events of 2022 have greatly accelerated the development of the “perfect storm” that we are now facing. We are being told that things will be far worse by the end of 2022 than they are now, and you probably don’t even want to hear about what the outlook for 2023 looks like. READ MORE