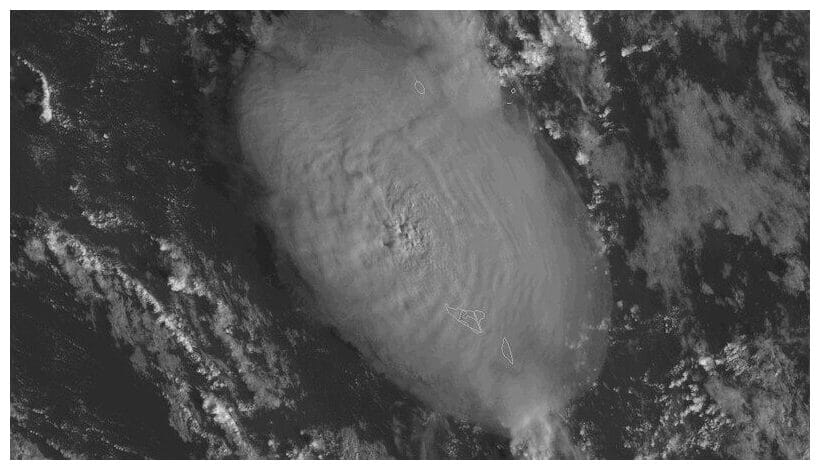 Scientists are racing to understand a puzzling series of massive ripples in Earth’s atmosphere triggered by the eruption of the Tongan volcano at the weekend.

According to a report from Nature, Satellite data shows that the event — which some fear might have devastated the Pacific-island nation — provoked an unusual pattern of atmospheric gravity waves. Previous volcanic eruptions have not produced such a signal, leaving experts stumped. “It’s really unique.

We have never seen anything like this in the data before,” says Lars Hoffmann, an atmospheric scientist at the Jülich Supercomputing Centre in Germany. The discovery was made in images collected by the Atmospheric Infrared Sounder (AIRS), mounted on NASA’s Aqua satellite, in the hours after the eruption of the Hunga Tonga–Hunga Haʻapai volcano on 14 January.

They show dozens of concentric circles, each representing a fast-moving wave in the gases of the atmosphere, stretching for more than 16,000 kilometers. The waves reached from the ocean surface to the ionosphere, and researchers think that they probably passed around the globe several times.

“This instrument has been operating for something like 20 years now and we have never seen such nice concentric wave patterns,” Hoffmann adds. Atmospheric gravity waves occur when air molecules in the atmosphere are vertically, rather than horizontally, disturbed in the air column. This can happen as wind picks up speed as it rises over a mountaintop, or as a result of convection in local weather systems.