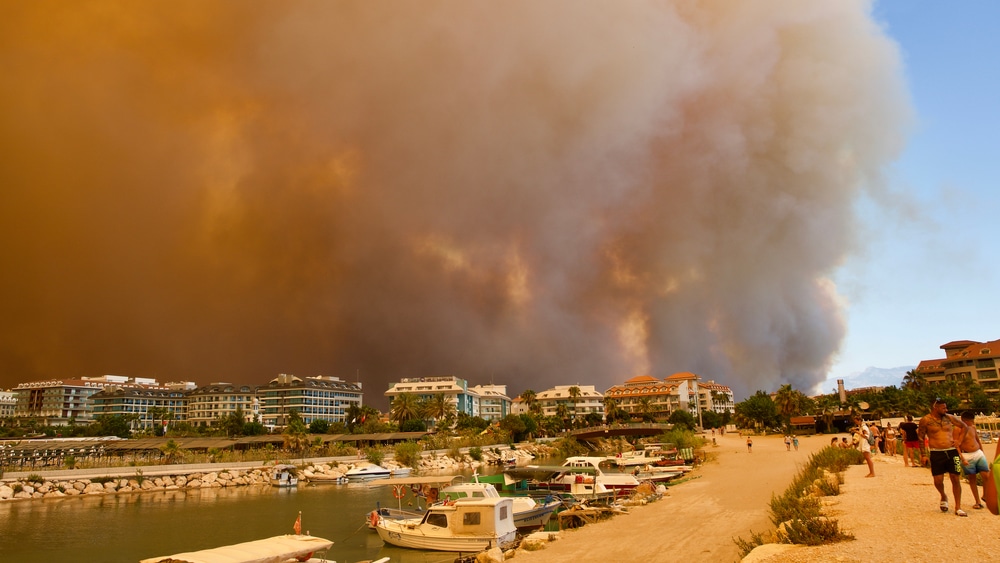 (ETH) – Little had prepared any of us on the Athens-bound flight for the sight of the great fire-induced clouds that swept either side of the plane as it made its descent on Friday.

According to the Guardian, News of the extreme heat engulfing Greece had spread beyond its borders all week, packaged in increasingly desperate language. Temperatures were breaking records few had ever imagined. If Monday was bad, then Tuesday was worse. In some parts of the country, the mercury had hit 47C (117F), with thermal cameras on drones recording the ground temperature in downtown Athens at 55C.

By Wednesday, we were hearing that entire tracts of suburban forest on the Greek capital’s northern fringes had gone up in flames. Infernos seemingly redolent of Dante’s hell had incinerated everything in their path; friends had lost homes; thousands had been evacuated with residents and tourists fleeing blighted zones by any means possible.

Terraces, an Athenian’s respite against the blazing heat, had been transformed into ash-laden no-go zones. Diomataris Glakousakis watched in horror as scorching flames engulfed a forest near his home. “This is a punishment,” the 53-year-old farmer from the suburban town of Kryoneri, just outside the Greek capital Athens, told NBC News.

“This is man’s fault.” Glakousakis said he had never lived through anything like it before. Sweaty and exhausted from a long night, Glakousakis had defied mandatory evacuation orders alongside about a dozen men to stay and protect their homes using olive branches, buckets of water, and household fire extinguishers. Next to Glakousakis’ land, two priests stood on the rooftop of a monastery desperately spraying garden hoses around the building’s perimeter.

“We didn’t have help from anyone,” Glakousakis said. “Only God helped us. Only God.” According to Express-News, Two people have already been killed, including a 38-year-old volunteer firefighter, and president of the Athens Chamber of Commerce, Konstantinos Michalos. A further 20 people have been injured. Prime Minister Kyriakos Mitsotakis said the fires showed “the reality of climate change”, and huge clouds of smoke and ash near the capital have meant many are urged to leave the area and seek safety elsewhere.

About 20 water-bombing aircrafts and hundreds of firefighters are being used to tend to the wildfires, whilst extra firefighters and planes are being sent in from countries including the France and the US to help get the situation under control.

The UK Government has also advised that Home Secretary Priti Patel is sending “experienced firefighters” to help the cause after witnessing the “devastating effect” of the fires. More than 150 fires have been reported, whilst six areas of the country have been put on high alert as the area copes with the extreme weather that has been affecting much of Europe this summer.