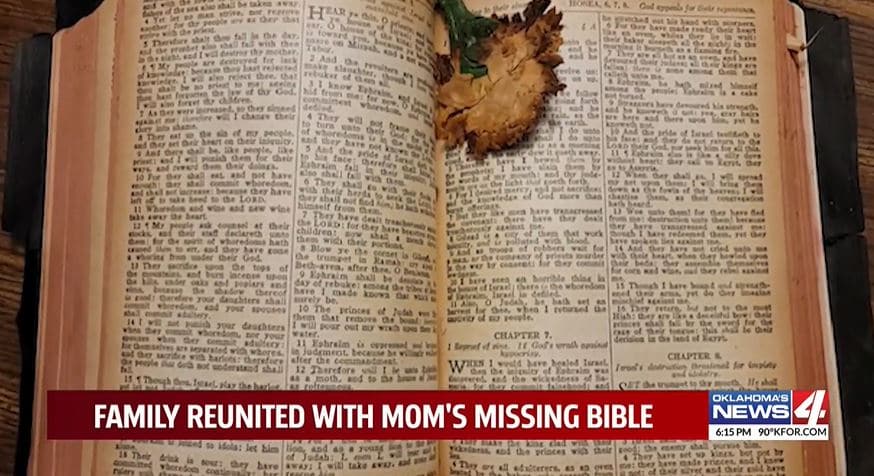 (ETH) – An Oklahoma family was reunited with their late mother’s Bible after a man found it while mowing his lawn. Terry Ward of Nikoma Park spotted the Bible last week in his flower bed.

“It rained all night, so it must have just been there for a little while because it wasn’t wet,” Ward told KFOR-TV. “Just laying there with some screws and some bullets.” Ward noticed that the name “Pearl Williams” and the year 1946 were printed inside. He contacted City Hall in an effort to locate the owner but there was no record of anyone with that name living in the town.

Ward went a step further and sought help from the local police and that’s when they found an address listed in Del City. “So I contacted the Del City Police Department and they went by the address,” Nicoma Park Police Lt. Mike Weiss said. “Luckily, the Bible’s owner – her son – still lived at that address.” Lisa Bennett, Williams’ daughter, was overjoyed to see the special keepsake, especially since she had just recently lost her mother.

“It was very emotional,” Williams said. “We lost my mom in October. So that was hard enough and now to find out that I have [her] Bible gives me part of her.” And Bennett found a few of her mother’s cherished mementos nestled inside the Bible. “Her wedding announcement was in the Bible from where she and my dad got married,” Bennett explained. “She kept different things that were very important to her.” READ MORE