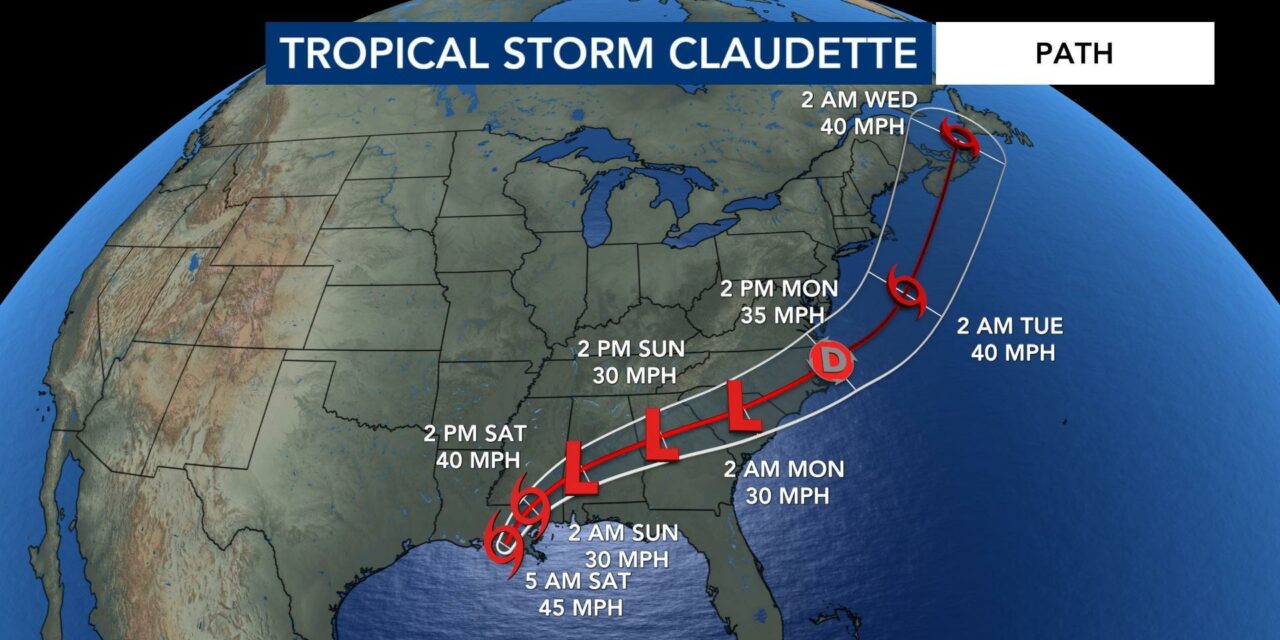 (ETH) – Tropical Storm Claudette, the third named storm of the Atlantic hurricane season, formed in the Gulf of Mexico and brought “copious rainfall” of five to 10 inches across the Mississippi Delta and Gulf Coast before being downgraded to a tropical depression on Saturday, forecasters said.

Maximum sustained winds decreased to 35 miles per hour, with higher gusts, the National Hurricane Center said on Saturday afternoon. “Claudette is expected to weaken a little more tonight, however, it is forecast to become a tropical storm again when it moves across the Carolinas Sunday night or early Monday.”

Claudette was expected to produce additional rainfall totals of three to 6 inches, with some pockets getting as much as eight inches, across eastern Alabama, northern Georgia, the Florida panhandle, and South and North Carolina, the center said.

Claudette also brought tornadoes to portions of Alabama, Florida, Georgia and Mississippi on Saturday, the National Hurricane Center said. A tornado in East Brewton, Ala., about 80 miles northeast of Mobile, touched down around 7:30 a.m. on Saturday, injuring three people, the authorities said. Gov. Kay Ivey said on Twitter that about 50 homes in a mobile-home park in the area were destroyed.

It is not unusual for tornadoes to develop within a hurricane system, said Dennis Feltgen, a spokesman and meteorologist with the center in Miami. “You’ve got these bands of thunderstorms that are rotating around the center and there is wind coming from all sorts of different directions, so they’ll spring up these tornadoes very quick,” he said. READ MORE