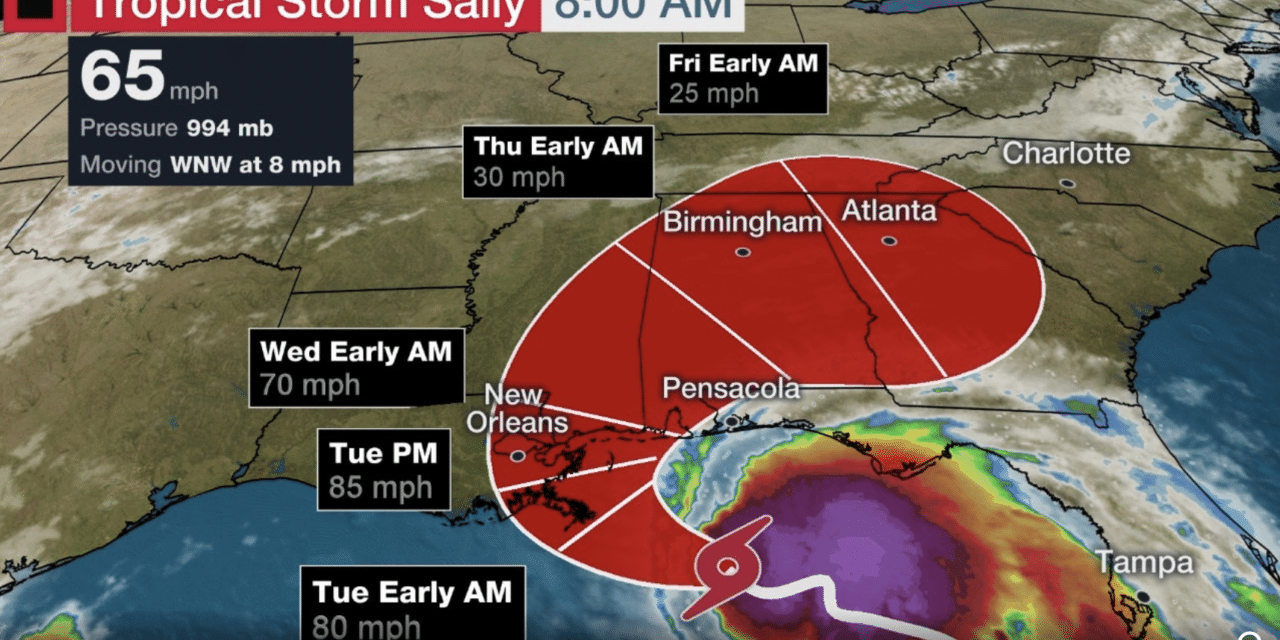 (ETH) – After soaking South Florida and the Florida Keys, Tropical Storm Sally is now strengthening and forecasted to become a powerful hurricane in the Gulf of Mexico.

Authorities have already issued warnings for New Orleans as the storm is expected to unleash a combination of dangerous conditions from wind and water in southeastern Louisiana and coastal Mississippi, including New Orleans.

Forecasters are also warning that Sally could potentially intensify rapidly to become a Category 2 storm before making landfall, with “an extremely dangerous and life-threatening storm surge” expected.  The Washington Post stated:

“Double-digit rainfall totals, even up to two feet, are also expected, with the risk of widespread and serious flash flooding added atop a growing threat from damaging winds. A hurricane warning is in effect from Morgan City, La. to the Mississippi-Alabama border, including New Orleans. Storm surge warnings have been hoisted as well between Port Fourchon and Alabama-Florida border.”

The Weather Channel issued the following warning: “A hurricane warning has been issued for portions of southeastern Louisiana east of Morgan City, Louisiana eastward to the Mississippi/Alabama border, including Lake Pontchartrain, Lake Maurepas and metropolitan New Orleans.

Hurricane conditions (winds 74 mph or greater) are expected in some parts of this area by late Monday and Tuesday. Hurricane watches and tropical storm warnings and watches are in effect to west and east of this hurricane warning, including parts of Louisiana, Mississippi, Alabama and the Florida Panhandle.

A storm surge warning is also in effect from Port Fourchon, Louisiana, to the border between Alabama and Florida, including Mobile Bay, Lake Pontchartrain, Lake Maurepas and Lake Borgne. This means there will be a danger of life-threatening inundation from storm surge within the warning area in the next 36 hours.”