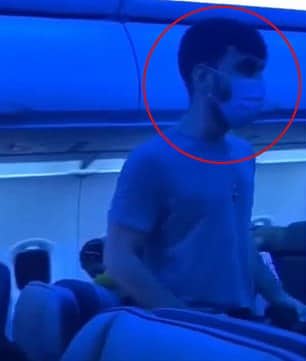 (ETH) – And now for today’s strangest story on the internet. According to a report from the Daily Mail, An Alaska Airlines flight was recently forced to make an emergency landing in Seattle, Washington after a passenger reportedly threatened to kill everyone on board if they didn’t accept that Jesus Christ was a “Black Man”.

The incident was captured on video, where it shows the man – wearing a face mask – moving through the cabin of Flight 422 bound for Chicago O’ Hare yelling: ‘I will kill everybody on this plane unless you accept Jesus was a black man.’

The video shows the deranged man moving past frightened passengers in their seats where he is heard shouting ‘accept it’ and ‘die in the name of Jesus’ multiple times.  ‘The man became extremely belligerent and physically aggressive during the ascent,’ an Alaska Airlines spokesperson reported.  The man was subdued by three passengers, including a law enforcement officer, and a flight attendant.