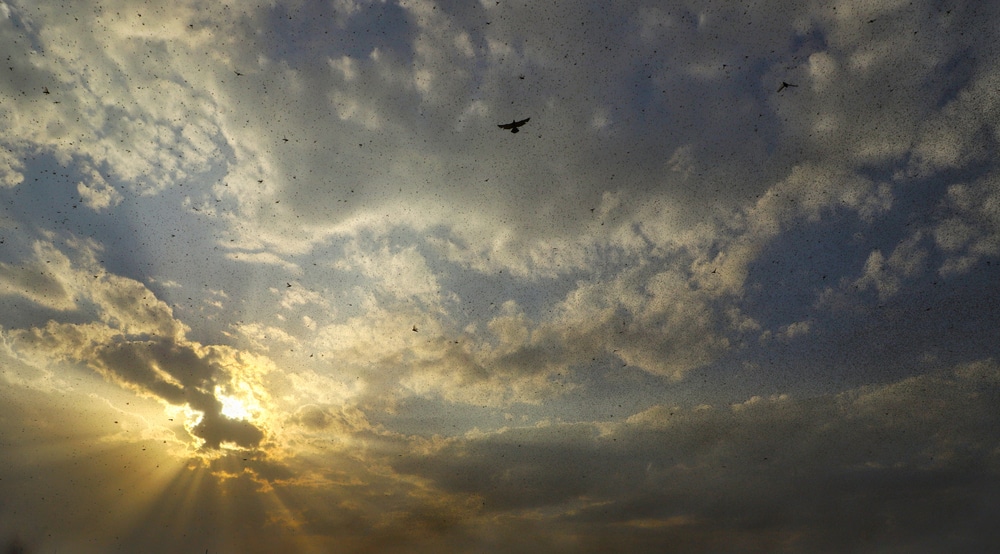 (ETH) – Tens of millions are on the verge of facing massive food shortages on the continent of Asia after a new plague of locusts has ravaged a path of destruction across India and Pakistan according to a report from the Express.

According to the report, In Pakistan, a national emergency has just been declared after an outbreak of locusts’, of “Biblical Proportions” has reportedly wreaked havoc across farmland in Eastern Punjab, southern Sindh, and southwestern Baluchistan provinces. Meanwhile, In western and central India up to 125,000 acres of crops have been completely destroyed during the worst outbreak the country has faced in decades.

According to the Bhagirath Choudhary, director of the New Delhi-based South Asia Biotechnology Centre, an agriculture think-tank said: “We have never, ever seen what we have in the last six months in India – never in the history.” According to a shocking report from National Geographic, a desert locust can consume its entire body weight in a day – as a result, such a swarm would decimate 423 million pounds of crops.

Then we have a report from the United Nations (UN) that estimates that a swarm of locusts can contain anywhere between 40-80 million of these insects and is capable of consuming the same amount of food in a day as three million people. The scale of this devastation has forced officials from India and Pakistan to work together to combat the outbreak.

A Pakistani Foreign Office spokesman recently stated: “On its part, the government of Pakistan remains committed to cooperating with all SWAC member states, including India, in combating the desert locust outbreak.” Locusts swarms of this scale pose a threat to all regions as they travel up to 81 miles in a single day.

The locusts have already taken a path of destruction spanning across Africa with experts fearing the monsoon season will again provide the ideal breeding ground. These swarms have stripped bare vegetation across East Africa including Somalia, Ethiopia, Kenya, Eritrea, and Djibouti.

According to the report, The UN Food and Agriculture Organisation has described the danger posed by the swarm of locusts as “an extremely alarming and unprecedented threat” and fear the devastation could endanger the food security and livelihoods of around 25 million people.