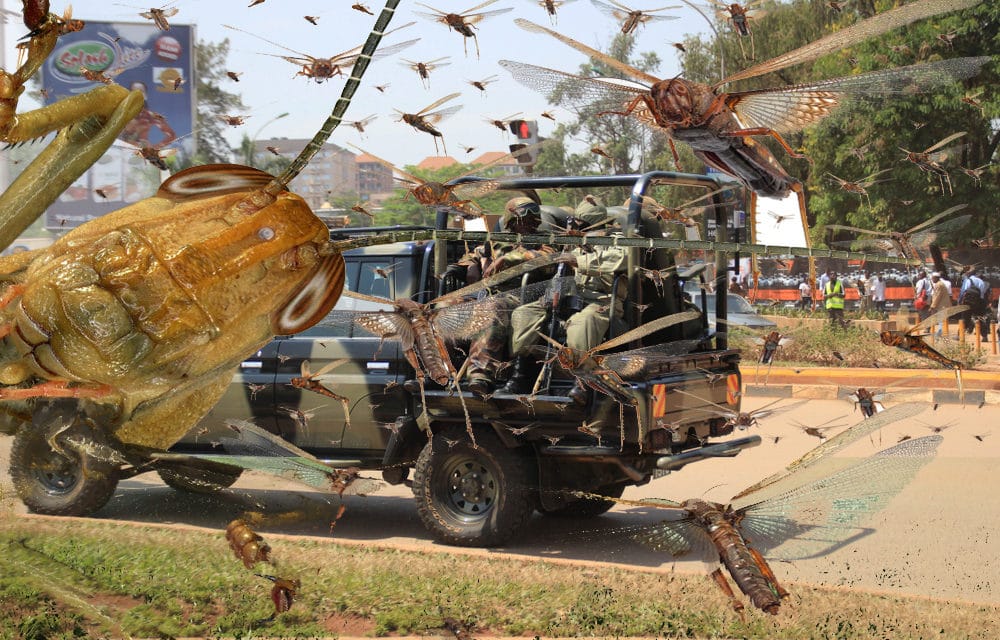 (ETH) – Uganda is now scrambling scrambled to combat the arrival of the largest locust outbreak that East Africa has seen in decades, Meanwhile, the United Nations has warned that “we simply cannot afford another major shock” to an already vulnerable region. According to reports, An emergency government meeting was initiated hours after the locusts were spotted inside Uganda on Sunday and has decided to deploy military forces to help with ground-based pesticide spraying. Two planes have also been deployed in the region for aerial spraying as it is considered the only effective control against the locust.

The Associated Press is reporting that Keith Cressman, the U.N. Food and Agriculture Organizations senior locust forecasting officer, said Kenya has received “waves and waves of swarms” since the beginning of the year from the Horn of Africa, and “over the weekend they moved on the side of Mount Kilimanjaro across the border into Tanzania.” “Also over the weekend they moved into northeastern Uganda,” he told a news conference at U.N. headquarters in New York. “We’re expecting any day they will move across the border into the southeast corner of South Sudan,” where another several million people face hunger as the country struggles to emerge from civil war.

These Massive swarms of locusts have reached not only reached Uganda but now Tanzania threatening millions of more people with hunger in an already fragile region. Repots indicate that Tanzania has detected swarms in its northern border areas close to Mount Kilimanjaro and hired three planes to spray pesticide, a tactic seen as the most effective means of countering the spread of the insects. The level of impact is unimaginable in these locusts infected regions. One large swarm in north-eastern Kenya reportedly measured 60km long by 40km wide but even a small swarm of locusts can consume enough food for 35,000 people in a day.