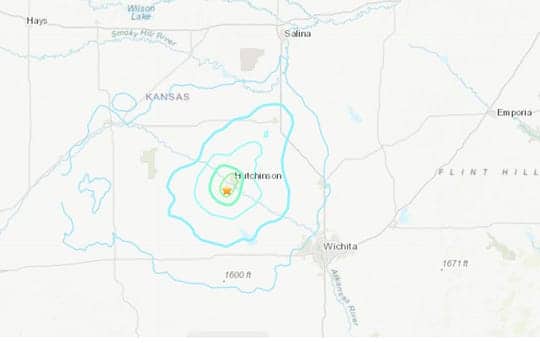 (USA Today) – A 4.2 magnitude earthquake shook portions of Kansas on Friday morning, the U.S. Geological Survey said. The center of the quake was roughly 3 miles from Hutchinson. There were no reports of major damage or injuries. However, as KWCH-TV in Wichita reports, residents did feel the quake and reported minor damage: Tim Black, who lives in Hutchinson, told the TV station his house shook and things fell off the walls. And Hutchinson resident Alice Hinnen said things fell off shelves in her home. She said she has felt earthquakes before,

but this is the strongest one yet. KWCH said people across Kansas felt this earthquake. “We’ve heard reports from people as far away as Topeka, Hays, Arkansas City, and into northern Oklahoma,” the station said on its website. Feeling quakes that far from the source is not unusual, the U.S. Geological Survey said: “Earthquakes east of the Rocky Mountains, although less frequent than in the West, are typically felt over a much broader region than earthquakes of similar magnitude in the West,” the survey said on its website. READ MORE