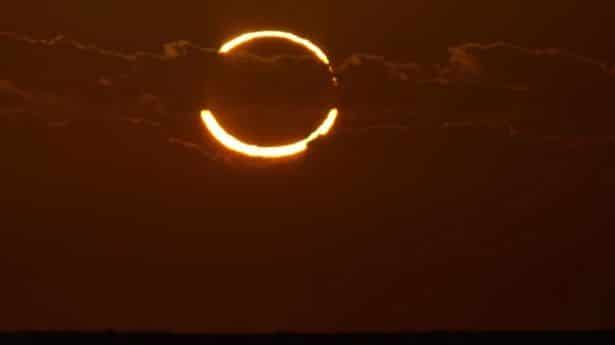 (OPINION) ETH – In what many are saying is a striking coincidence, the 2020 summer solstice will reportedly occur on the very same day as a major annular eclipse. However, according to the Daily Star, some believe this is more than just a mere “coincidence” but believe that darkness that will fall on June 21st is a sign in the Heavens that the apocalypse is near.

The solar eclipse taking place this Sunday is the first time the breathtaking phenomenon has occurred this year, and experts are saying it will be the “deepest” eclipse of the century as it will take place during the solstice when the sun is at maximum elevation. In this event the moon will reportedly cover up to 98.8% of the sun’s disc, making the eclipse appear more unique than previous events with just a narrow ring visible in the sky for about 30 seconds in where we derive the term “Ring Of Fire” eclipse.

According to the report, Millions of people in the northern Indian region will witness a particularly unusual eclipse. “Instead of a wide fiery ring, the sun may appear as a necklace of shiny beads (known as Baily’s Beads) due to light filtering through the moon’s hills and valleys,”  astrophotographer Ajay Talwar told the Times of India. But for many, this isn’t just a rare astronomical event but actually fear it’s a sign of the end of the world.

One Christian evangelist Paul Begley who believes the world is soon coming to an end has seized on this year’s catastrophic events as proof of the “coming apocalypse”. He recently stated: “Guys, we are in end-time plagues,” he said in a recent video on his YouTube channel where he has more than 335,000 subscribers. “Locusts of a biblical proportion are destroying countries like Yemen, Ethiopia, Kenya, Somalia, Sudan, Pakistan now has been swamped, India overwhelmed with locusts.”

Countries in East Africa and the Middle East have been continually struggling with an unprecedented number of locusts after a major breeding season, coupled with the country’s pest control abilities hampered by the coronavirus pandemic. The Bible reveals that locusts were used as one of the Ten Plagues of Egypt inflicted by God to pressure Pharaoh to free the Israelites from slavery and bondage. Begley believes that this eclipse event on June 21st is yet another sign of armageddon, referring to another of the ten plagues – when God told Moses that “darkness will spread over Egypt” for three days.

This eclipse will also be visible from Israel leading the Begley to speculate that once more the people of the “Holy Land” will be thrown into darkness in a bad omen. “There are three major signs in the heavens that are going to happen between now and the end of the year,” he said. “The first one is on June 21. We’re going to have a solar eclipse that’s going to go over the entire Holy Land. “It’ll be over Israel for six hours. The Sun will turn to darkness for six hours.

“Are you serious? A ring of fire will be around the Sun.” Begley also points to a second “major sign in the heavens” which is another eclipse that will occur on July 4th, which will be a penumbral lunar eclipse that coincides with Independence Day. “The midnight Blood Moon over American on the Fourth of July is certainly a prophetic sign,” he said.

Paul Begley isn’t the only voice claiming that this weekend’s eclipse is a harbinger of things to come.  Many other “conspiracy theorists” have recently stated that the notorious 2012 apocalypse – which obviously never took place was calculated to happen eight years too early. So Instead, they are now saying, the Mayans predicted a world-ending catastrophe on June 21, 2020, rather than on December 21, 2012, because they were relying on the Julian Calendar rather than the Gregorian Calendar.

However, we know this will be another flop because Jesus plainly told us that “No man knows the day of the hour” And then there is the “doomsday planet” Nibiru followers that have also claimed the mythical space body has entered our solar system and is barreling towards Earth that will end in a deadly collision on June 21st.  A recent video shared on social media this week claimed to show the rogue planet close to Earth. So what are you going to choose to believe? Conspiracies or the Bible?