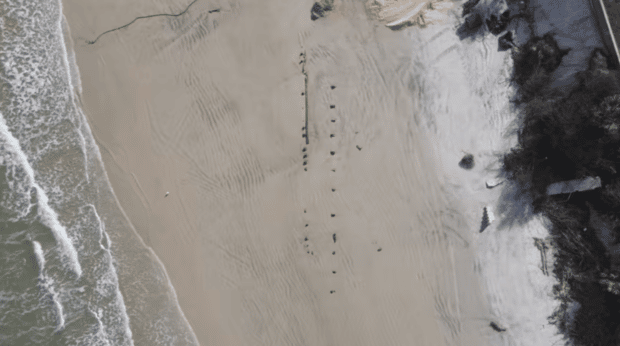 Beachgoers in Florida discovered a mysterious object buried underneath the sand, perplexing locals and officials. The object began protruding out of the sand after Hurricanes Ian and Nicole battered Volusia County earlier this year, said Kevin A. Captain, a spokesperson for Volusia County.

It appears to be a wooden structure and looks like pieces of wood poking out of the beach for about 80 feet. It was discovered Thanksgiving weekend by beachgoers, Captain told CBS News via email. He said an archeologist is visiting the beach on Tuesday to examine the structure. CBS News has reached out to the Florida Department of State for more information and is awaiting response.

The erosion on the beach has been “unprecedented,” Volusia Beach Safety Deputy Chief Tammy Malphurs told CBS News affiliate WKMG. “We haven’t seen this kind of erosion in a very long time,” she said. “I’ve been on the beach probably 25 years and that’s the first time I’ve seen it exposed.”

“We’re not sure what it is,” Malphurs said about the structure. Hurricane Ian hit Florida as a Category 4 on Sept. 28, while Hurricane Nicole made landfall in the state as a Category 1 on Nov. 10. These hurricanes and Hurricane Fiona extensively damaged parts of Florida and Puerto Rico.

After Nicole made landfall, Gov. Ron De Santis said the storm would be less significant than Ian, but still make an impact – especially in Volusia County, located just above where the storm officially made landfall, according to CBS Miami.

“This is obviously not as significant storm as Hurricane Ian was, but coming on the heels of that, you’re seeing communities, particularly in the Volusia County area, that had a lot of that erosion on the coastline,” DeSantis said during a press conference. “This has put some of those structures in jeopardy, and they’ve been working very hard to make sure everybody’s safe.” (SOURCE)