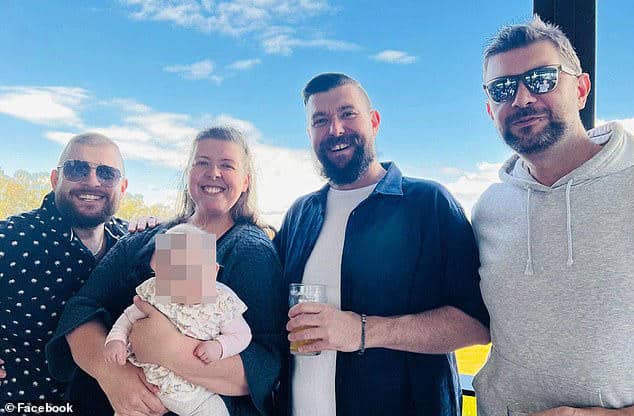 A beloved mother-of-two, who had four Covid vaccinations, died just hours after testing positive for the virus. Sydney healthcare worker Melanie Leffler, 39, passed away unexpectedly in her sleep on November 19. She had tested positive on a rapid test that day, with her husband Mick saying she only had a running nose and a slightly sore throat.

Her brother Kris Leffler said the family has yet to receive the coroner’s report but believes her sudden death may be due to complications with her heart.

Inflammation of the heart muscle and the tissue surrounding the heart, known as myocarditis and pericarditis, can in rare cases be caused by Covid vaccines but is also a result of the virus itself. Kris described his sister as one of the ‘hardest working, goal-oriented, strongest-willed women’ he ever knew.

‘No one should be burying a partner, sister or daughter at 39,’ he told Seven News. Ms. Leffler had overcome losing a kidney to a rare form of cancer when she was just 12 months old, which inspired her own desire to study medical science.

She went on to become a genetic counselor for NSW Health. ‘Mel always wanted a beautiful family but was fearful that her chemotherapy in early life may have affected her reproductive system, but she took time out of her hectic work schedule to try and begin a family,’ her brother Kris said. Her shattered family and friends paid tribute to the beloved mum in a series of gut-wrenching social media posts.

‘Roz and I lost our beautiful, intelligent, and loving 39-year-old daughter, Mel, overnight. To say we’re shocked and deeply saddened would be an understatement,’ wrote her father Wayne. ‘We’re devastated – things will never be the same.’

Her younger brother Joel wrote of his sudden shock. ‘I was never meant to be writing this until we were old and grey… but 39 is far far too soon,’ he said. ‘Our family will never be the same without you Melly – fly high my big sis.’

The family also launched a GoFundMe to support Ms. Leffler’s husband in raising their young family. Mick is now left to raise the couple’s two daughters, Clementine, four, and Lottie, who is just nine months old. ‘We are all very confused and saddened that such a young mother, daughter, sister, niece and friend’s life has ended so tragically early,’ family member Nicole Leffler wrote in the fundraiser’s description. (SOURCE)