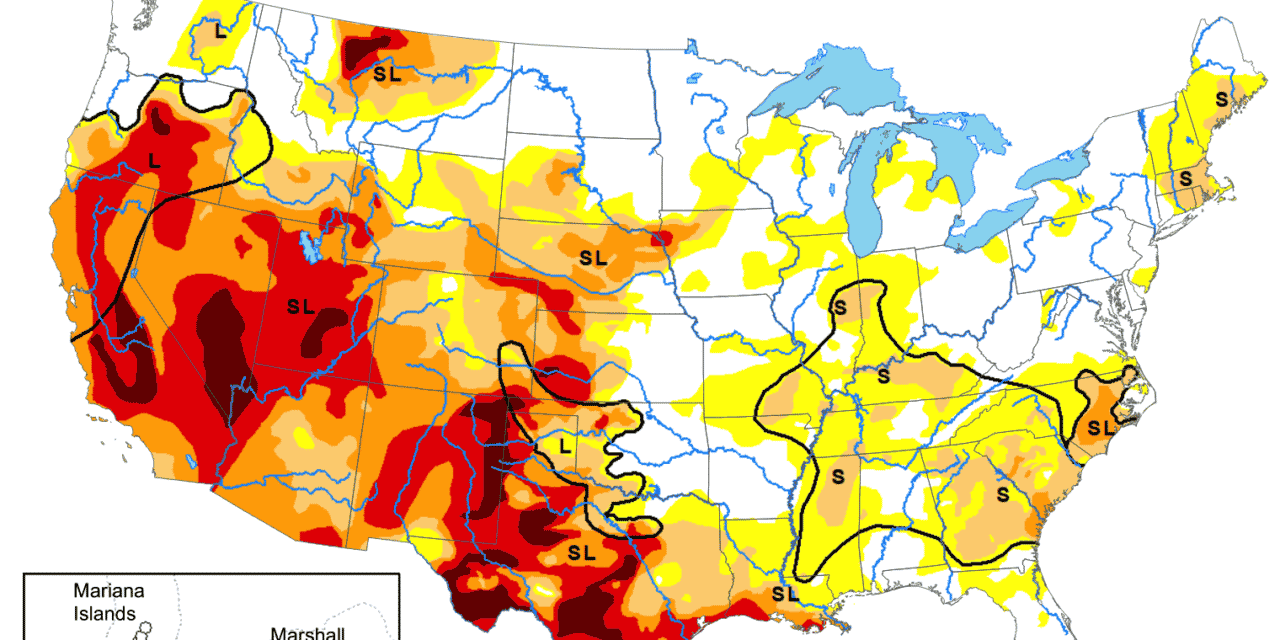 (OPINION) The endless drought in the Southwest has become a full-blown national emergency. If Lake Mead, Lake Powell and the Colorado River keep drying up at the rate they have been, millions of Americans could soon be without water and electricity. Despite all of our advanced technology, those living in the Southwest continue to be extremely dependent on a handful of critically important water sources, and if those water sources get so low that they cannot be used we are going to have a major crisis on our hands.

The National Park Service says that Death Valley is the hottest and driest place in North America, but the truth is that vast stretches of the Southwest are now starting to resemble Death Valley. For example, Utah has been dealing with extremely unusual heat in recent weeks and at this point nearly the entire state is officially suffering from either “extreme drought” or “exceptional drought”.

The state’s Department of Natural Resources (DNR) said the water levels have sunk past the last record set in October, which at the time had matched a 170-year record low. DNR officials and weather experts warn that the water levels at the Great Salt Lake are expected to drop even further until fall or early winter as the West contends with an ongoing drought.

Meanwhile, water levels in Lake Mead and Lake Powell continue to fall as well. If water levels keep sinking in the months ahead, millions of Americans living in the Southwest could soon lose their main source of electricity…

Supplies at Lake Mead and Lake Powell are dangerously low, holding just more than a quarter of their total capacities — and threatening the dams’ ability to generate electricity and provide water to its nearly 40 million users. At its highest level, in the 1980s, Lake Mead could have submerged the Empire State Building up to its top floor. Now, water levels have dropped by nearly 200 feet, or 20 stories, exposing a stark white “bathtub ring” around the rocky walls of the perimeter.

The drinking water for millions of Americans is also at risk. Normally, the Colorado River provides drinking water for approximately 40 million people, but now it is drying up really fast. And we aren’t talking about a crisis point that is years or even months away.

If California and six other states can’t agree to severe water reductions in less than 60 days, the U.S. government “will do it for them”… California and six other Western states have less than 60 days to pull off a seemingly impossible feat: Cut a multi-way deal to dramatically reduce their consumption of water from the dangerously low Colorado River.

If they don’t, the federal government will do it for them. Needless to say, the endless drought is also having a massive impact on agriculture. Normally Kansas grows more wheat than any other state, but this year fields all over western Kansas are in really bad condition…

This time of year, the wheat growing in this part of western Kansas should be thigh-high and lush green. But as a months-long drought continues to parch the region, many fields tell a different story. “There’s nothing out there. It’s dead,” farmer Vance Ehmke said, surveying a wheat field near his land in Lane County. “It’s just ankle-high straw.”

Most of us don’t think much about where our food comes from, but the truth is that if farmers don’t grow it we don’t get to eat. And right now many wheat fields in western Kansas “look like barren wastelands”… Across western Kansas, many fields planted with wheat months ago now look like barren wastelands. The gaping spaces between rows of brown, shriveled plants reveal hardened dirt that’s scarred with deep cracks from baking in the sun.

Of all the years for drought to hit western Kansas wheat farmers, it couldn’t have come at a worse time. There was a period of time last century when we witnessed similar things. The Dust Bowl days of the 1930s are a very dark chapter in American history, and now those conditions are returning.

In recent years, giant dust storms have become quite common in states such as Arizona and New Mexico, but now they are starting to happen in states as far north as Iowa… Iowa’s News Now Meteorologists Nick Stewart and Rebecca Kopelman captured an impressive view from a haboob in northwest Iowa Thursday night.

A haboob is an intense dust storm. One hit near Little Rock, Iowa Thursday night bringing 70 mile per hour winds and zero visibility. Normally it is very rare for such a storm to ever happen in Iowa, but thanks to the endless drought there is a tremendous amount of dust that can now be picked up and blown around… Although not impossible to see in Iowa, they are rather uncommon. However, severe to extreme drought in Nebraska, South Dakota, and far western Iowa left a lot of dry soils to be kicked up by Thursday’s intense winds. READ MORE