TN Republican censored by Facebook for saying, ‘Biological men have no place in women’s sports’ 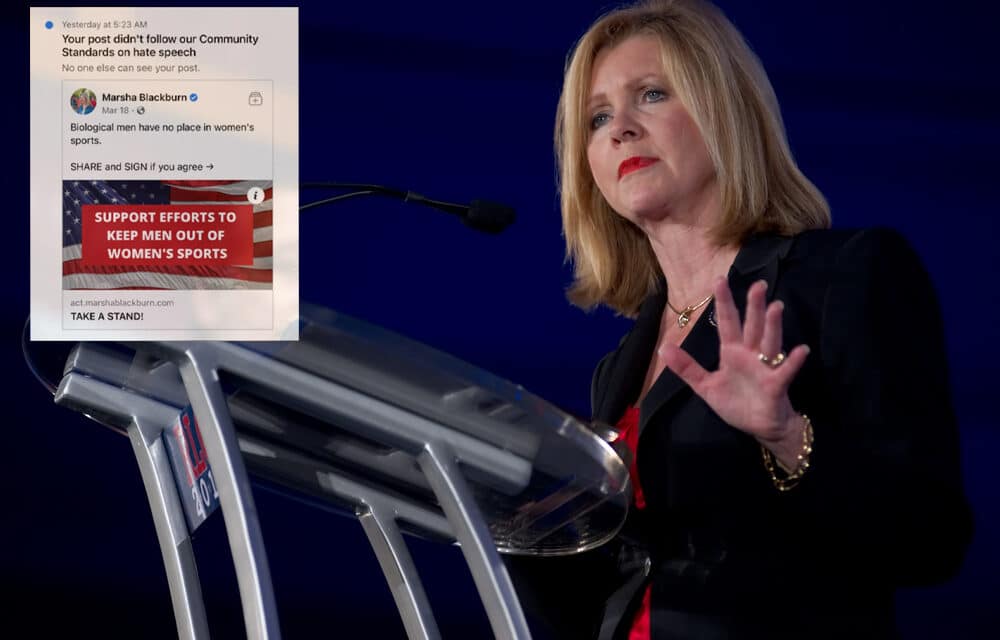 (OPINION) Facebook has censored Tennessee Republican Sen. Marsha Blackburn after she posted that gender-dysphoric male athletes should not compete in women’s sports.

“Biological men have no place in women’s sports,” Blackburn wrote in a post shared to her personal Facebook page. It linked to a donation website that encouraged her supporters to “fight back against Big Tech censorship” by adding their names to her campaign email list and making a contribution, according to TheBlaze.

The Tennessee Republican blasted Facebook and its parent company, Meta, as a “Silicoln Valley oligarch” and said she would not be silenced. “Big Tech and the Democrats are colluding to radically transform America,” Blackburn said in a statement to Fox News.

“They want to silence and censor conservatives for speaking out against their woke agenda. It does not take a biologist to know the difference between a man and a woman, and I will not be silenced or threatened by Silicon Valley oligarchs. Biological men have no place in women’s sports.”

Blackburn, who garnered attention in March after she asked future Supreme Court Justice Ketanji Brown Jackson to “provide a definition for the word woman,” has been a vocal supporter of protecting female sports in America and has repeatedly spoken out against biological males competing in them.

In an effort to highlight the problems surrounding female sports allowing biological males to compete, Blackburn interviewed Kentucky swimmer Riley Gaines, who tied with transgender swimmer Lia Thomas for fifth place in the 200-yard freestyle NCAA swimming championships in April on the “Unmuted with Marsha” podcast.