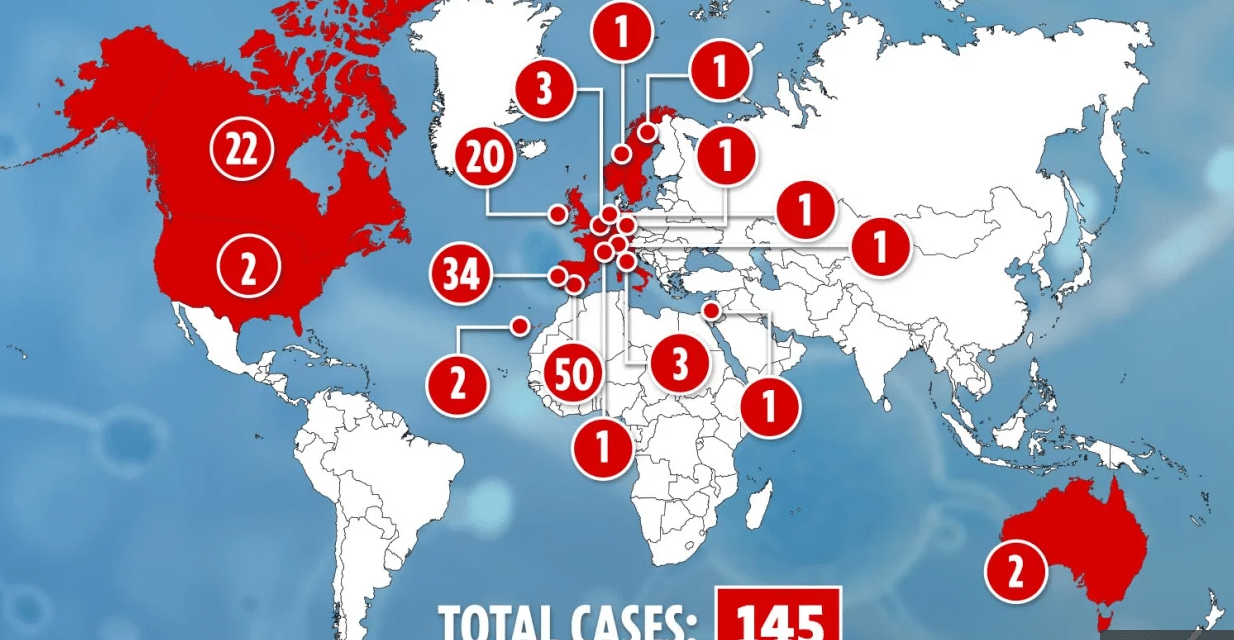 Monkeypox cases in Spain and Italy have been traced to an island festival attended by 80,000 partiers.  According to TheSun, Authorities are trying to halt an outbreak that has exploded across Europe and beyond, with 92 cases now confirmed and dozens more suspected.

Cases of monkeypox in the UK have doubled in just a week after a total of 20 cases were reported. And doctors warned that the number will rise significantly as the virus spreads through Europe and as far as the US, Canada, and Australia. Spain now has the highest number of infections, outside places in Africa where the virus is endemic, with more than 50 known cases.

Now authorities are investigating a festival in Gran Canaria after it was linked with a number of cases in Madrid, Tenerife, and Italy. The Canaria Pride festival, held in the town of Maspalomas between May 5 and 15, has become a hotspot for the monkeypox outbreak, reports El País.

The massive party was attended by over 80,000 people, including three Italian men who later tested positive for the virus. A health source told the newspaper: “Among the 30 or so diagnosed in Madrid, there are several who attended the event, although it is not yet possible to know if one of them is patient zero of this outbreak or if they all got infected there.”

Scientists who have monitored numerous outbreaks of monkeypox in Africa say they are baffled by the disease’s recent spread in Europe and North America. Cases of the smallpox-related disease have previously been seen only among people with links to central and West Africa.

But in the past week, Britain, Spain, Portugal, Italy, the U.S., Sweden, and Canada all reported infections, mostly in young men who hadn’t previously traveled to Africa. There are about 80 confirmed cases worldwide and 50 more suspected ones, the World Health Organization said.

France, Germany, Belgium, and Australia reported their first cases Friday. “I’m stunned by this. Every day I wake up and there are more countries infected,” said Oyewale Tomori, a virologist who formerly headed the Nigerian Academy of Science and who sits on several WHO advisory boards. “This is not the kind of spread we’ve seen in West Africa, so there may be something new happening in the West,” he said.

Meanwhile, Belgium has become the first country to introduce a compulsory 21-day monkeypox quarantine – as 14 countries now confirm outbreaks of the viral disease, and doctors warn of a ‘significant rise’ in UK cases.

Those who contract the virus will now have to self-isolate for three weeks, Belgian health authorities have said, after three cases were recorded in the country. The infections, the first of which was recorded on Friday, are all linked to a festival in the port city of Antwerp.

It comes as doctors have warned that the UK faces a ‘significant’ rise in infections and the government’s response is ‘critical’ in containing its spread. Dr. Claire Dewsnap, president of the British Association for Sexual Health and HIV, has also said the outbreak could have a ‘massive impact’ on access to sexual health services in Britain.

It comes as Dr. Susan Hopkins, a chief medical adviser to the UK Health Security Agency, today also warned that monkeypox is spreading through community transmission in the UK with more cases being detected daily.

According to the NYP, President Biden said the increasing spread of monkeypox, which has been detected in the United States and Europe, is something “to be concerned about.” Biden was asked during a stop in South Korea on Sunday what his health advisers have been telling him about the disease that rarely spreads beyond Africa.

“They haven’t told me the level of exposure yet, but it is something that everybody should be concerned about,” he told reporters at Osan Air Base before boarding Air Force One for a flight to Japan.

“We’re working on it hard to figure out what we do and what vaccine, if any, may be available for it,” he continued. “But it is a concern in the sense that if it were to spread, it’s consequential.” Jake Sullivan, the White House national security adviser, said the US is prepared and has a supply of “vaccine that is relevant to treating monkeypox.”