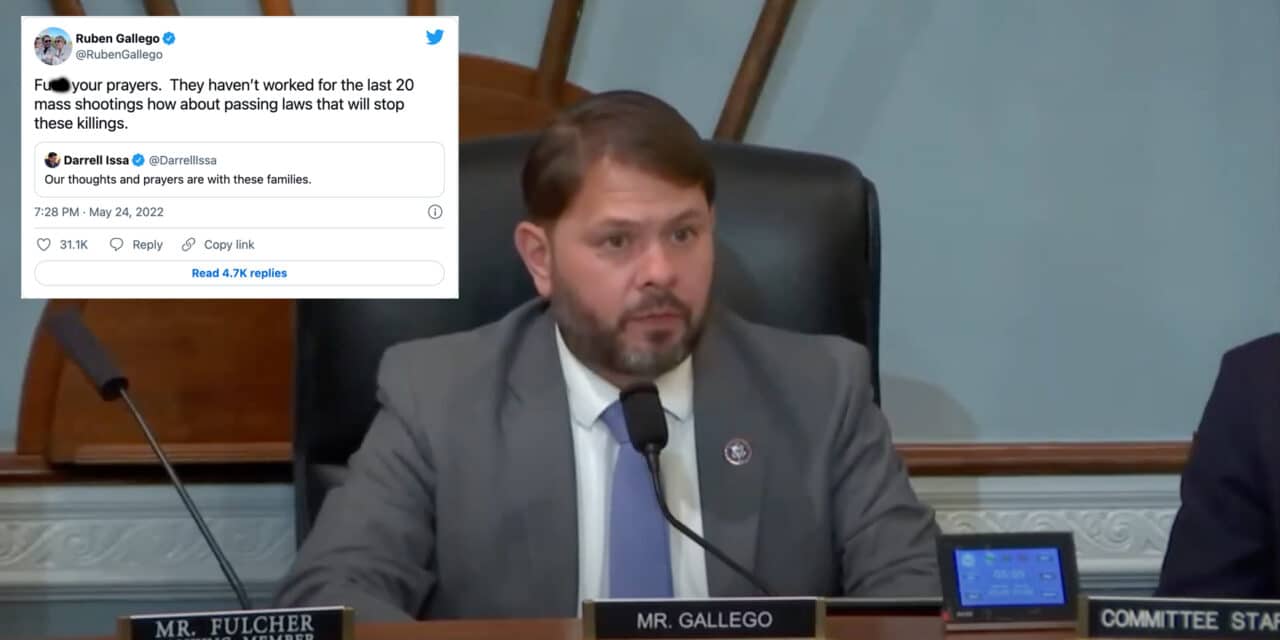 (OPINION) Democrat Rep. Ruben Gallego of Arizona called GOP Texas Senator Ted Cruz a ‘f***ing baby killer’ in a series of Twitter posts on Tuesday night expressing his outrage and grief over the mass shooting in Uvalde, Texas that killed at least 19 students and two teachers at Robb Elementary School.

Gallego, an Iraq war veteran, raged at lawmakers who have stood in the way of recent federal gun reform legislation efforts after an 18-year-old gunman slaughtered nearly two dozen people and then reportedly was killed by law enforcement.

‘Just to be clear f*** you [Ted Cruz] you f***ing baby killer,’ Gallego tweeted. Cruz told CNN after the shooting, ‘Inevitably when there’s a murder of this kind, you see politicians try to politicize it, you see Democrats and a lot of folks in the media whose immediate solution is to try to restrict the constitutional rights of law-abiding citizens.’

“Inevitably when there’s a murderer of this kind, you see politicians try to politicize it, you see Democrats and a lot of folks in the media whose immediate solution is to try to restrict the constitutional rights of law abiding citizens,” Cruz said.

The Texas senator later tweeted that he and his wife “are lifting up in prayer the entire Uvalde community.” An email sent to Cruz’s media office seeking comment on Gallego’s tweets was not immediately returned.

Gallego also targeted his ire at the nation’s largest gun lobby, writing “F—- you @NRA,” and at California Republican Rep. Darrell Issa, who offered thoughts and prayers to the victims. “F—- your prayers,” Gallego wrote. “They haven’t worked for the last 20 mass shootings how about passing laws that will stop these killings.”