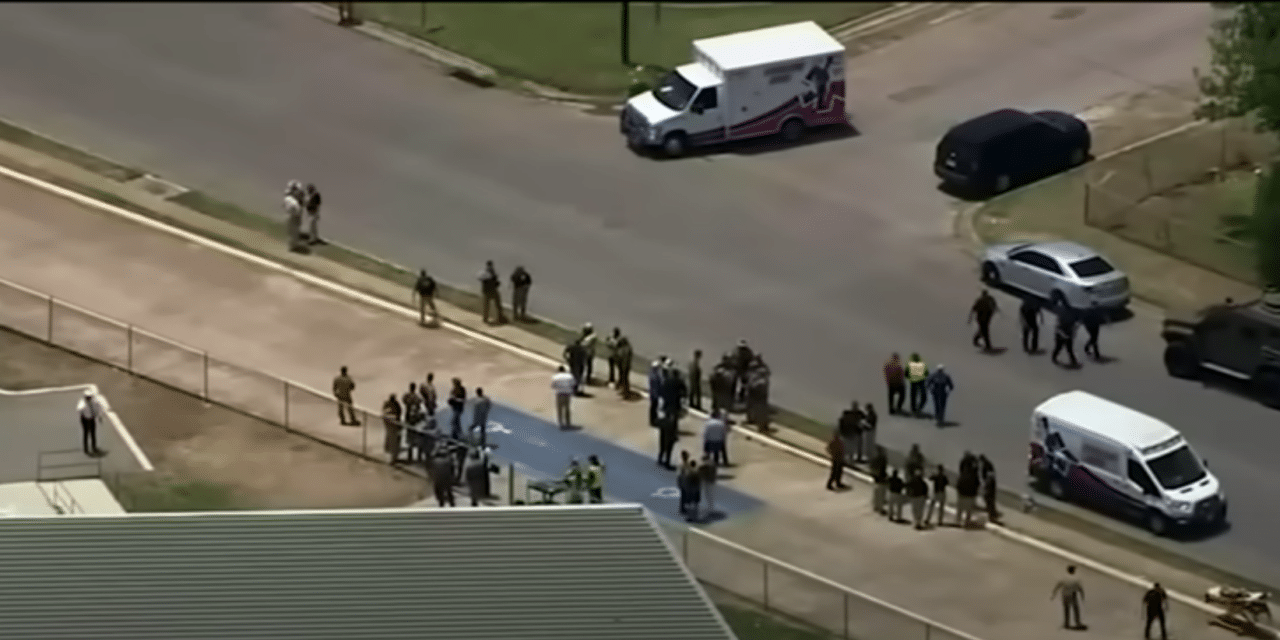 The unnamed student, whose face was not shown on camera, recalled during an interview with Henry Ramos (no relation to the shooter) of San Antonio’s CBS affiliate, KENS 5, what he went through.

“He shot the next person’s door. We have a door in the middle,” said the fourth-grader during the interview, which aired on Wednesday. “And he opened it. And then he came in and he crouched a little bit and he said, ‘It’s time to die.’ When he shot, it was very loud and it hurt my ear. When I saw the bullets on the floor it was real.”

He recalled telling his friend to hide under something so that the shooter couldn’t find them. According to Ramos, “the boy and four others hid under a table that had a tablecloth over it, which may have shielded them from the shooter’s view and saved their lives.”

“When I heard the shooting through the door, I told my friend to hide under something so he won’t find us,” he said. “I was hiding hard. And I was telling my friend to not talk because he’s going to hear us.”

“The cops said: ‘[Yell] if you need help!’ And then one of the persons in my class said, ‘Help.’ The guy overheard and he came in and shot her,” said the student. “And then the cops barged into that classroom. And the guy shot at the cops and the cops just started shooting.”

The fourth-grader said that after the shooter was killed, “I just opened the curtain. And then I just put my hand out. And then I got out with my friend ‘cause I knew it was the police when I saw the armor and the shield.”

Also, the NYP is reporting that when an 11-year-old student at Robb Elementary School in Uvalde, Texas, saw her friend get fatally shot in front of her inside their fourth-grade class Tuesday, she went into what her aunt called “survivor mode” and smeared the other girl’s blood on her body to convince the gunman that she, too, was dead.

“My sister-in-law said is that she saw her friend full of blood, and she got blood and put it on herself,” Blanca Rivera told station KPRC of her niece, Miah Cerrillo. Before playing dead, the quick-thinking girl also managed to grab her dead teacher’s phone and call 911 for help.

Miah survived one of the worst mass school shootings in US history, but her family says the harrowing ordeal has left her traumatized. Rivera, the girl’s aunt, said at around midnight on the night of the shooting, she got a call from Miah’s mom, saying that the fourth-grader was having a “panic attack.”

The massacre claimed the lives of 19 students and their two teachers, Eva Mireles and Irma Garcia. Several others were injured, among them Miah, who was left with multiple bullet fragments in her back.

Law enforcement eventually shot and killed the suspected gunman, 18-year-old Salvador Ramos, who had barricaded himself inside the classroom and spent 40 minutes executing children and adults as desperate parents standing outside the school begged cops at the scene to go inside