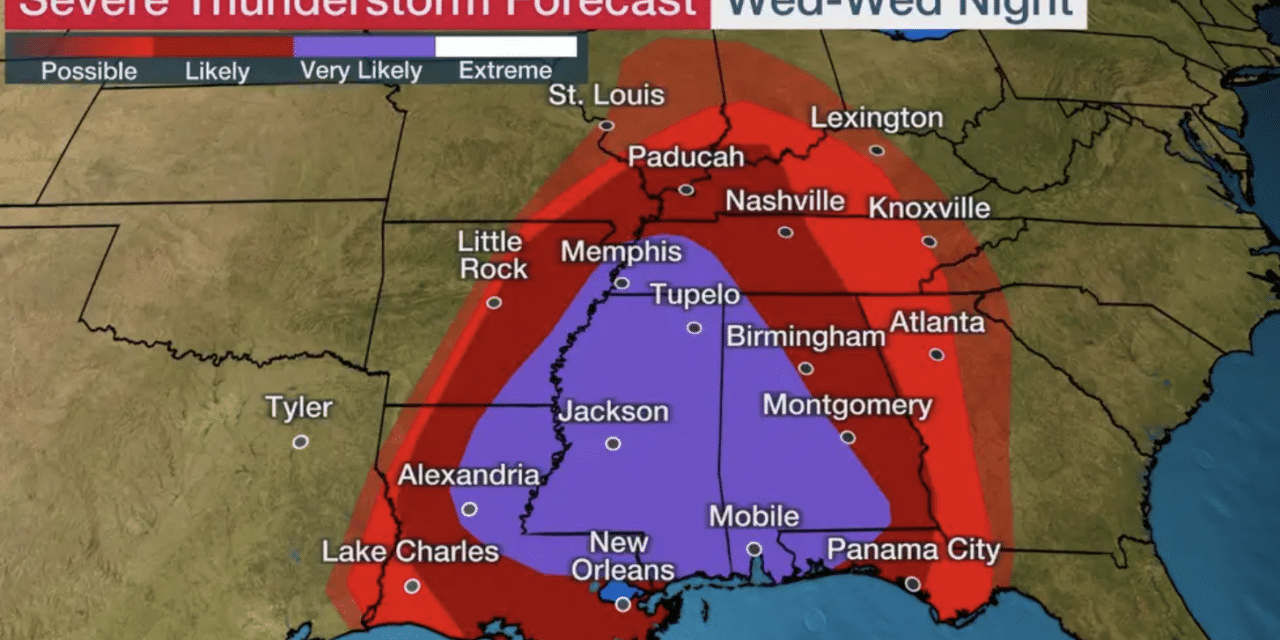 A dangerous outbreak of severe storms will sweep through the South through tonight, packing widespread destructive winds, tornadoes, large hail, and heavy rain.

A line of thunderstorms and heavy rain is marching through southern Missouri, Arkansas, and Louisiana right now. NOAA’s Storm Prediction Center has issued multiple tornado watches from the Mid-South to the northern Gulf Coast in effect through this evening. Damage has been reported from a likely tornado earlier this morning in Springdale, Arkansas.

Tornado damage in St. Joseph, Missouri, from Tuesday night has been rated EF1. This line of storms will continue to sweep through the South from parts of southern Missouri, Arkansas, and Louisiana into western Kentucky, Tennessee, Mississippi, Alabama, and western Georgia through early Thursday morning. Widespread damaging winds – including some gusts over 75 mph – and tornadoes will all be possible in this squall line of severe thunderstorms.

AccuWeather Meteorologist Dean DeVore explained that following the departure of cold air, an upcoming temperature swing could help produce a higher concentration of severe weather reports in that region.

“The warm, moist air that will be drawn up ahead of the approaching front on Thursday will help to provide the atmospheric ingredients needed for some strong to severe thunderstorms to fire,” said DeVore.

As thunderstorms develop, locations from North Carolina to Pennsylvania, New Jersey, and New York will be the most at risk for severe weather through Thursday evening. Residents in cities such as Pittsburgh; Binghamton, New York; Raleigh, North Carolina; Washington, D.C.; and Philadelphia should all remain alert.

Flooding downpours, hail, and damaging winds are expected in this zone, with an AccuWeather Local StormMax™ of 80 mph possible. “There is the potential for a few storms to produce tornadoes as well, especially during the afternoon hours, prior to the storms organizing into a solid line,” AccuWeather Senior Meteorologist Alex Sosnowski said.

Motorists along highways such as along portions of interstates 64, 76, 81, 85, and 95 should remain on alert for downpours that can bring ponding on the roadways as well as periods of reduced visibility that can lead to slower travel times.