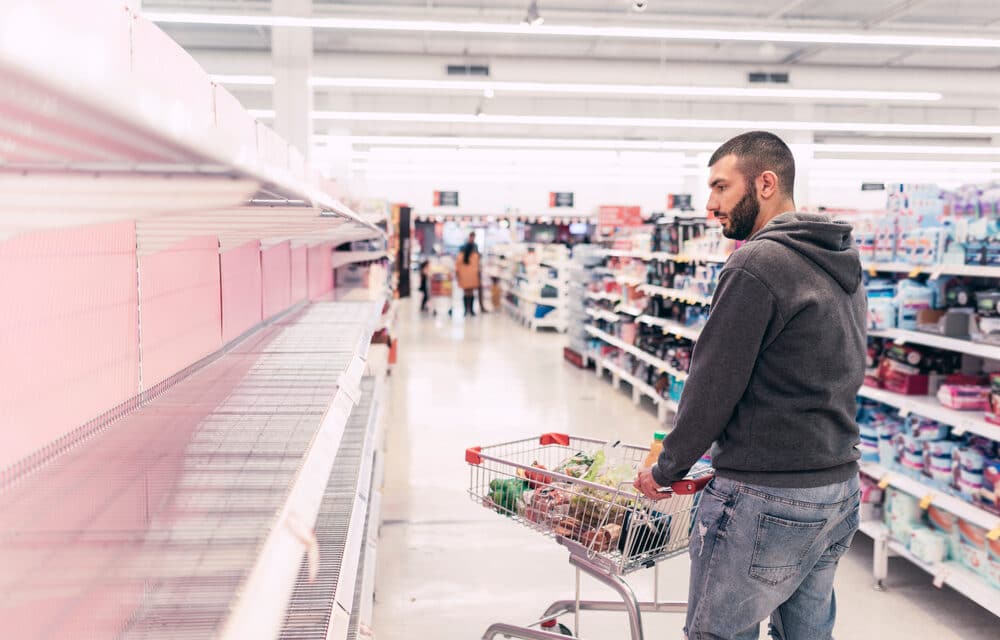 High demand for groceries combined with soaring freight costs and Omicron-related labor shortages are creating a new round of backlogs at processed food and fresh produce companies, leading to empty supermarket shelves at major retailers across the United States.

Yahoo News reported that growers of perishable produce across the West Coast are paying nearly triple pre-pandemic trucking rates to ship things like lettuce and berries before they spoil. Shay Myers, CEO of Owyhee Produce, which grows onions, watermelons, and asparagus along the border of Idaho and Oregon, said he has been holding off shipping onions to retail distributors until freight costs go down.

Myers said transportation disruptions in the last three weeks, caused by a lack of truck drivers and recent highway-blocking storms, have led to a doubling of freight costs for fruit and vegetable producers, on top of already-elevated pandemic prices. “We typically will ship, East Coast to West Coast – we used to do it for about $7,000,” he said.

“Today it’s somewhere between $18,000 and $22,000.” Birds Eye frozen vegetable maker Conagra Brands’ (CAG.N) CEO Sean Connolly told investors last week that supplies from its U.S. plants could be constrained for at least the next month due to Omicron-related absences.

Reuters reported that earlier this week, Albertsons (ACI.N) CEO Vivek Sankaran said he expects the supermarket chain to confront more supply chain challenges over the next four to six weeks as Omicron has put a dent in its efforts to plug supply chain gaps.

WAFF48 stated: “The problems we have been having recently are different than the problems we were having this time last year,” said Star Super Market employee, Steve Hammer. Gone are the days of panic buying to now just items not there to buy.

Impacting produce and meat and packaged goods like cereal. Hammer says from what they have observed it appears it’s not the products themselves causing the lack of inventory, but a lack of packaging. “Like the little CapriSun’s… All that kind of stuff is individually packaged inside the boxes.

We believe there is some type of an issue with the packaging itself to put go put the liquid inside of…” said Hammer. While items are harder to find, many also cost more with rising inflation.

“Empty shelves are causing the inflation. Things are in short supply because of the pandemic. Of course, if you are a story and you have very little of something left you are going to raise the price on them because you need to slow down people buying them,” said UAH Economics Professor, Dr. Wafa Orman.