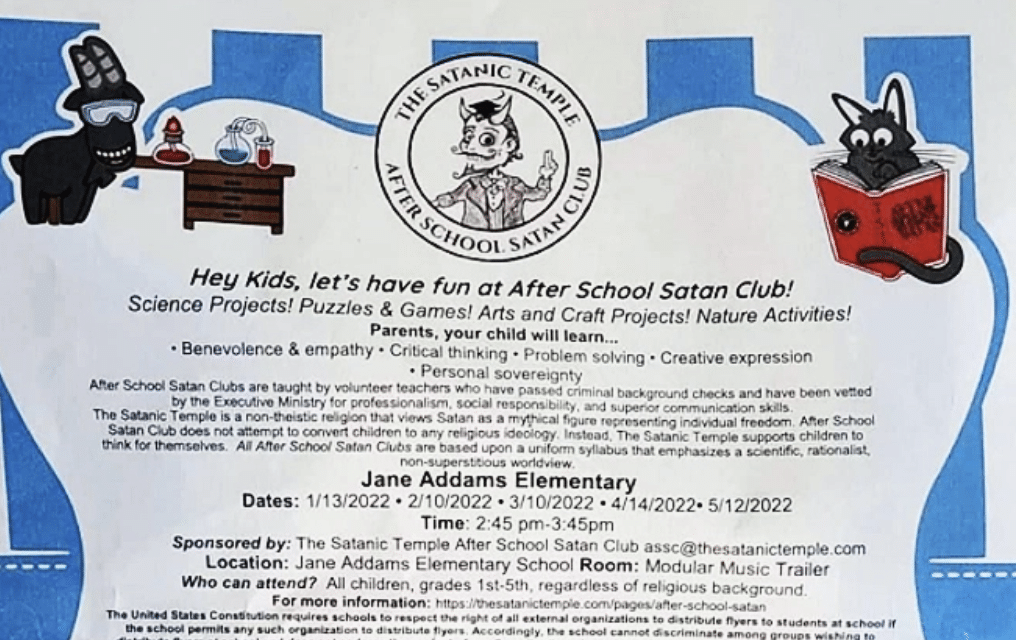 An elementary school in Illinois advertised an after-school Satan club hosted by the Satanic Temple for students in first through fifth grade, drawing the ire of parents.

The Washington Examiner reported that Children at Jane Addams Elementary School in Moline, Illinois, are invited to attend an “after-school Satan club” on five different dates throughout the spring semester, according to a flyer advertising the club that was posted online.

FOX 2 revealed that the flyer drew the ire of parents, one of whom posted a picture of the flyer on social media, saying, “How is this even a thing?” The parent added: “I just know they’re about to catch hell because I would be going off.” In a statement to FOX 2, a Moline-Coal Valley School District spokesperson said the district has “policies and administrative procedures in place which allow for community use of its publicly funded facilities outside the school day.”

“The Moline-Coal Valley School District and Board of Education have policies and administrative procedures in place which allow for community use of its publicly funded facilities outside the school day,” the district statement said Tuesday, noting it doesn’t discriminate against any groups who wish to rent public facilities, including religious-affiliated groups.

“Religiously affiliated groups are among those allowed to rent our facilities for a fee,” the district said. “The district has, in the past, approved these types of groups, one example being the Good News Club, which is an after-school child evangelism fellowship group. Flyers and promotional materials for these types of groups are approved for lobby posting or display only, and not for mass distribution.

“Students or parents are then able to pick up the flyer from the lobby, if they so choose, which is aligned to District policy,” the statement says. “Please note that the district must provide equal access to all groups and that students need parental permission to attend any after-school event. Our focus remains on student safety and student achievement.”