Meat, Eggs and Potatoes are all coming up short as stores report ‘bare shelves’ amid Omicron cases 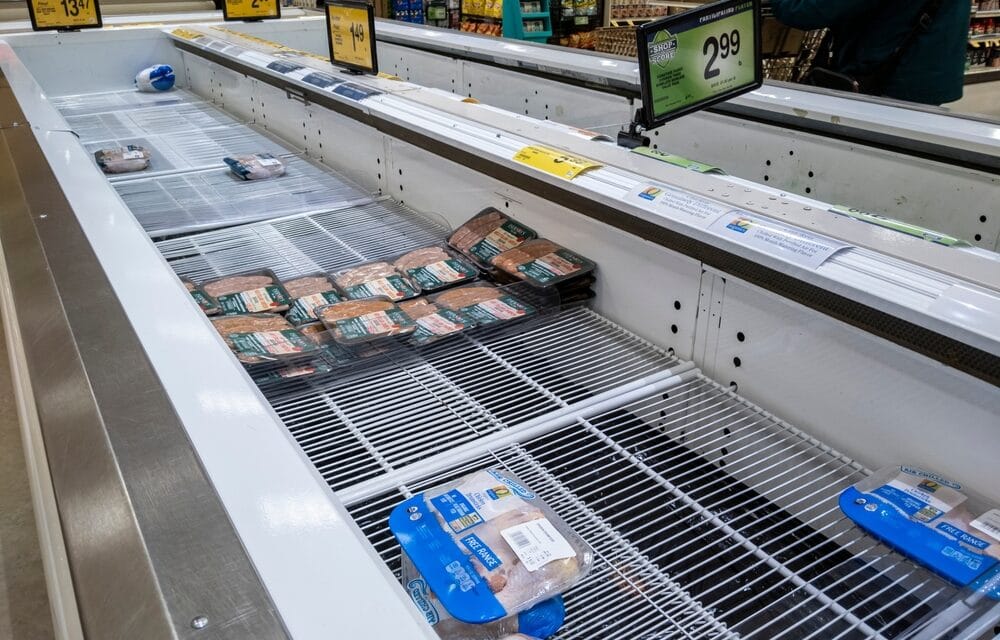 Several American supermarkets are reporting incidents of “bare shelves” as fears grow over an imminent meat and egg shortage amid a surge in Omicron cases.

According to TheSun, Food chains have been one of the first to be disrupted by the new super strain as workers fall ill and productivity drops. The effect of Omicorn, has already seen a shortfall of labor, including farms and manufacturers, and distributors, according to The Los Angeles Times.

Schools and daycare centers are also feeling the ramifications with fuel prices set to rise as more Americans are kept working at home. The Grand Rapids Mich.-based grocery distributor and store operator SpartanNash Co. claim they have seen a tripling of cases amongst its staff, leading to delays and workers who feel stretched thin. And with reports of “bare shelves,” Bindiya Vakil, chief executive of supply-chain consultant Resilinc Corp, warns that “Labor shortages due to Omicron are only going to exacerbate the issue.”

About 1% of its 18,000-person workforce reported having the virus in recent weeks, compared with about one-third of a percent a couple of months ago. The company has been able to fulfill orders, but with delays. The employees who are available are working more. “It’s harder because we’re asking people to work overtime,” CEO Tony Sarsam said in an interview. “We’re stretching ourselves.”

Meanwhile, There’s also a growing global potato shortage — a real problem for a planet addicted to french fries and chips. A number of popular items, including marmite and cream cheese, have faced scarcities amid supply chain disruptions wrought by the coronavirus pandemic and extreme weather.

MSN News is reporting that potatoes are the latest to join the list, becoming unevenly available in some countries and fast-food chains because of a confluence of factors.  In Japan, McDonald’s locations stopped offering large and medium-size french fry orders late last month, after pandemic-related supply chain issues and floods in the Port of Vancouver delayed potato shipments.