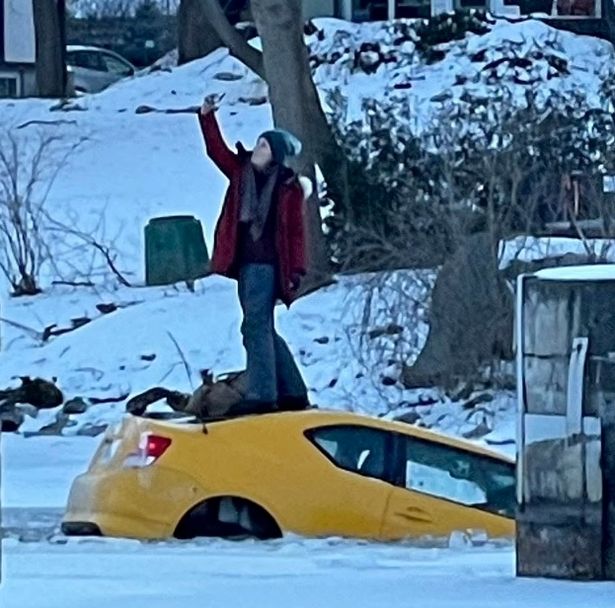 A woman whose car plummeted into a frozen river managed to find time to take a selfie of her mishap before her vehicle completely sank.

According to the Daily Star, The motorist, who has since been charged by Canadian cops for dangerous driving, posed for the snap while she stood on the boot of her yellow sedan as it slipped into the sub-zero Rideau River in Manotick, which is a suburb of Ottawa.

The Mirror reports that while she was posing for her photo, locals were scrambling to mount a rescue, eventually grabbing a blue kayak and tying it with rope to drag her out of the massive ice hole. By the time the kayak reached her, only the roof of her vehicle was visible above the river.

The car remains where it sank, and the authorities have warned that it could be a hazard for people wandering around on the ice, curious to take a look. According to witnesses who shared videos of the crash on social media, at one point she said: “Oh well. I guess I’ll walk.”

Police responded to the scene at 4.30 pm and charged her with dangerous driving. But driving on ice is not actually illegal in the country, where it snows often, the MailOnline reports. Paramedics also attended but the woman refused treatment, according to Canada’s National Post newspaper.