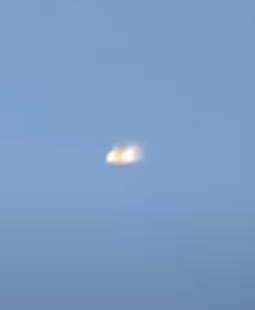 A “TIC-TAC” shaped UFO has been spotted flying and appearing to shapeshift near a US Space Force base, a skywatcher has claimed. Jason Suraci filmed several strange orbs and pill-like objects over the air-force base and posted them on his YouTube channel and Instagram.

The aerial phenomena were said to have been repeatedly over spotted over Buckley Space Force base in Aurora, Colorado, US. US Space Force units are tasked with protecting US satellites orbiting the planet and were first set up by Donald Trump in December 2019.

Mr. Suraci shared numerous snippets of footage that showed the objects during broad daylight and a night using a night vision camera. The objects appear to change shape while others are similar to the infamous ‘Tic Tac’ UFO filmed by US Navy pilots in an infamous encounter in 2004.

It comes as the US continues to probe UFOs – now more commonly known as Unidentified Aerial Phenomena (UAPs) – following the release of a much-anticipated report by the Pentagon. The Pentagon UAP report confirmed there have been numerous unexplained encounters between the US military and UFOs – and it did not rule out the possibility of aliens. READ MORE