(ETH) – Hurricane watches were issued for several Gulf Coast states Friday morning as Tropical Storm Ida, which formed in the Caribbean Sea, barreled toward the southern U.S. with forecasters warning it could rapidly strengthen into one of the strongest storms of the Atlantic hurricane season.

According to USA Today, The warnings were issued along the Gulf Coast of Louisiana, including New Orleans, Mississippi, and parts of the Alabama coastline. A tropical storm watch was also issued along with parts of the Alabama coastline to the Florida border. A tropical storm warning for the Cayman Islands was discontinued Friday morning but remains in effect for two of the islands: Little Cayman and Cayman Brac. 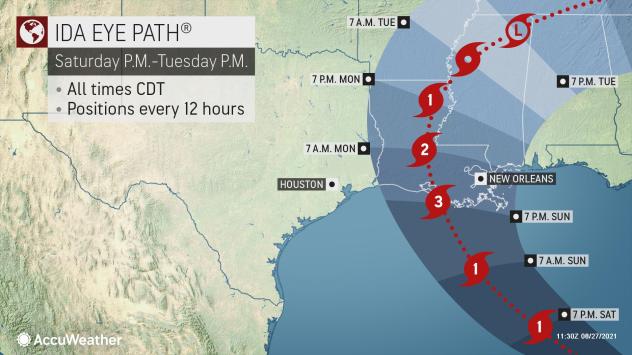 The system is taking aim at the U.S. Gulf Coast, but conditions appear right for the storm to cause extreme weather for inland regions as well, according to a Thursday afternoon AccuWeather briefing. Senior meteorologist Dan Kottlowski said parts of Tennessee still reeling from deadly floods are at risk for more heavy rain.

Louisiana Gov. John Bel Edwards declared a state of emergency Thursday evening due to the potential impacts from the future hurricane. “Unfortunately, all of Louisiana’s coastline is currently in the forecast cone for Tropical Storm Ida, which is strengthening and could come ashore in Louisiana as a major hurricane as Gulf conditions are conducive for rapid intensification.

Now is the time for people to finalize their emergency game plan, which should take into account the ongoing COVID-19 pandemic,” Edwards said. New Orleans is covered under the hurricane watch, and many residents were already taking to the stores to stock up on food and supplies ahead of Ida’s arrival. The Sewerage and Water Board of New Orleans was assessing three downed pumps on Thursday, but officials expected 96 out of 99 drainage pumps to be available.