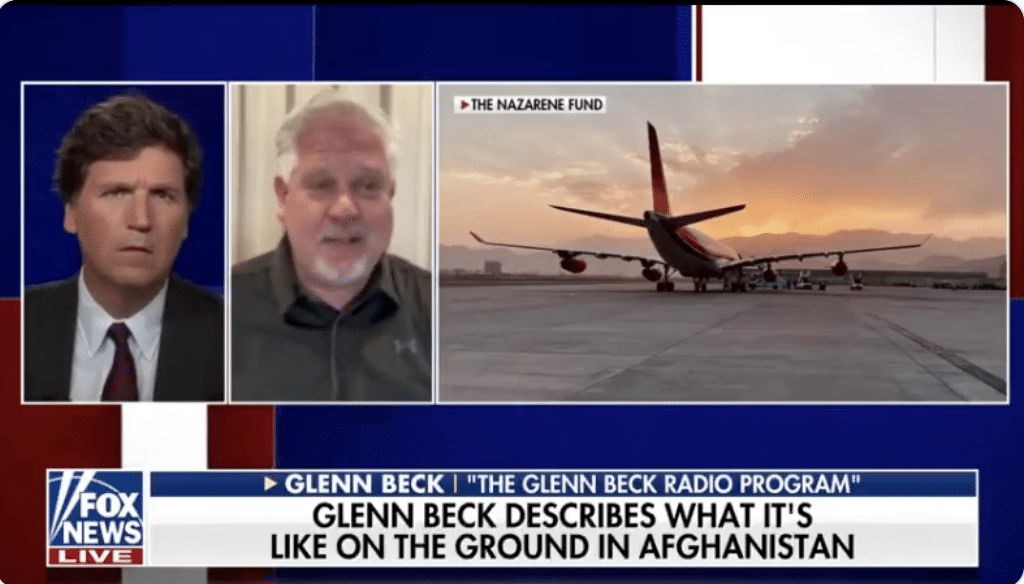 (ETH) – As concerns grow over the Biden administration’s ability to evacuate Americans ahead of the planned military withdrawal from Afghanistan, nonprofit organizations are working to assist U.S. citizens and Afghans seeking to flee the nation that’s been overrun by the Taliban.

According to the Christian Post, With less than a week until the Aug. 31 deadline for withdrawal of remaining U.S. troops from Afghanistan, the federal government is working to evacuate American citizens and Afghans who risk being tortured and executed by the Taliban, a terrorist organization.

The State Department reported Wednesday that no more than 1,500 American citizens seeking to leave Afghanistan remain there.  Efforts to bring American citizens and Afghans to safety continue after two explosions in Kabul killed 13 Marines and one Navy Corpsman on Thursday.

.@glennbeck on @TuckerCarlson says the US State Department is blocking his organization's help every step of the way, and is likely directly responsible for the death of a large group of Afghan Christians. https://t.co/RkIwc1N36x pic.twitter.com/dlRTEIG6X8

The Department of Defense attributed the attacks to the terrorist group ISIS-K, a local affiliate of the terrorist group ISIS. On “Tucker Carlson Tonight” Thursday, Fox News opinion host Tucker Carlson profiled The Nazarene Fund, a charity founded by conservative radio host Glenn Beck, as one of a small number of groups that have “headed to Afghanistan and the region to help evacuate people who are trapped there because the Biden administration just isn’t doing that very effectively.”

In an interview with Carlson, Beck elaborated on the progress his organization has made in evacuating American citizens and vulnerable Afghans from the country: “We have pulled out 5,100 people, Christians, women, children and put them on planes.” READ MORE