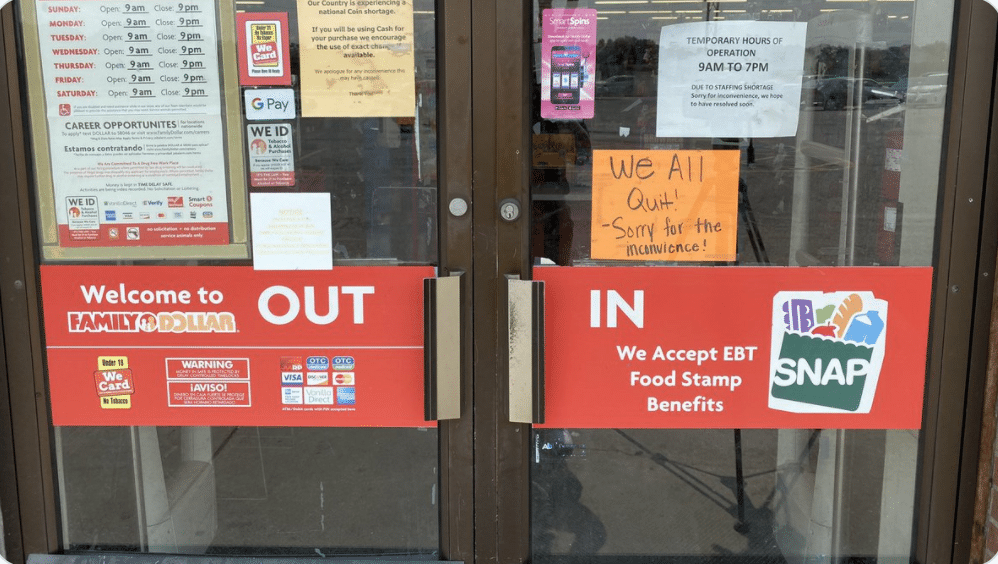 (ETH) – A Family Dollar store in Lincoln, Nebraska reopened Monday after being forced to temporarily close when the entire staff, fed up over poor pay, management, and long hours, walked off the job On Sunday according to FOX 5 News.

The store’s assistant manager, Breanna Faeller, and the store’s only cashier left a farewell note on the front door of the store that read: “We all quit. Sorry for the inconvenience.” Faeller told FOX Business that they were the only two working at the store as of Sunday. Everyone else, including the store’s manager, had already quit, she said.

Faeller said the problem started three to four months ago, when the store lost all of its cashiers and its other assistant manager due to alleged issues with the manager. “The working conditions were so bad because it was a never-ending cycle of trying to play catch up with everything,” she said. “We had five employees, max, at all times.

A Family Dollar store near Leighton Ave. has a sign on its door saying everyone has quit. I’ll be speaking with a former employee later today. Watch @1011_News at 5:30 and 10 for the full story. pic.twitter.com/N42lIfBDKV

You can’t run a whole store with five employees.” According to more details from the entrepreneur, Austin confirmed that the store was located near Leighton Ave in Lincoln. Former employees of Family Dollar and customers of that particular location responded to Austin’s findings, most seemingly unsurprised by the dramatic walkout.

One user, who claimed to be a former employee of Family Dollar twice over alleged that the company will “put minimal employees on and give you a ton of work to do and don’t care about anything else, and send you two to three trucks a week and expect them done in 24 hours on top of ringing up people, front-facing store and playing security guard.”

A former customer of the Lincoln location added that that the store has “had severe staffing issues years before the ‘nobody wants to work anymore’ mantra ever started. This was going to happen eventually.”