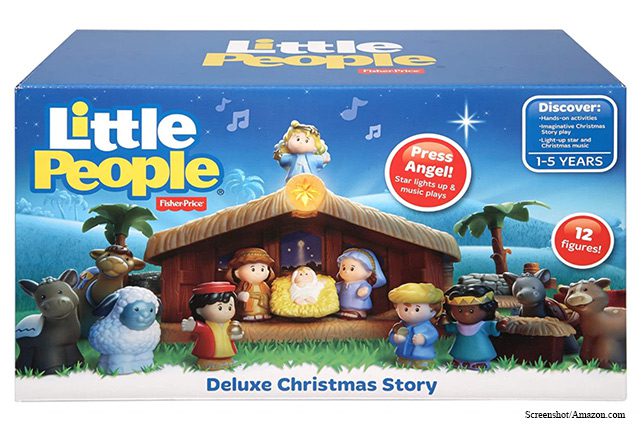 (OPINION) ETH – Fisher-Price’s deluxe Little People Christmas Story playset features a light-up star, a musical stable, three wise men, and a number of animals, all fashioned in their beloved round-bodied figures that are easy for little hands to hold.

The playset also features a white holy family. Faithful America, an online community of Christians of all denominations advocating for social justice, is encouraging Fisher-Price to change its depiction of Mary, Joseph, and the baby Jesus before the start of the 2021 holiday season, saying it “fuels white supremacy.”

“Most of the time we only see white Jesus, and every new image of white Jesus just reinforces that. We’re not making these toys in a vacuum, they’re adding to all the other toys and every church painting and every Renaissance painting that already exists,” said the Rev. Nathan Empsall, an Episcopal priest and executive director of Faithful America.

Faithful America is circulating an online petition asking Fisher-Price and its parent company, Mattel, to portray the holy family as people of color in its Nativity sets and commit to no longer selling products depicting Jesus as white. “This doesn’t just get history wrong; it also fuels white supremacy, as many theologians and historians have noted,” according to the petition.

The petition points to statements by well-known Catholic scholars and theologians Anthea Butler and the Rev. James Martin saying images of Jesus as white, in particular, have been used to promote the idea that “white is best.” And it’s personal to Empsall, whose toddler received the playset from a relative last Christmas. It’s “adorable,” he said, but it also is an image that will stick with children throughout their lives. READ MORE