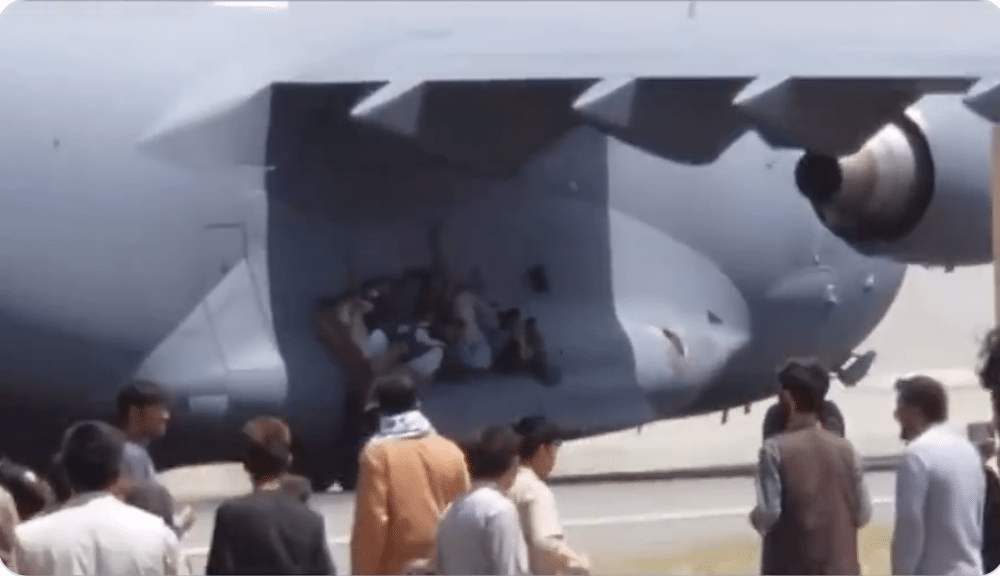 (ETH) – People have fallen to their deaths after clinging to C-17 jets taking off from Kabul airport, in an attempt to flee the Taliban in Afghanistan, local media reported.

According to INSIDER, Footage posted on Twitter by the Afghan news agency Aśvaka appeared to show a person falling from a plane as it took off from the airport. Other photos — which Insider is not publishing due to their graphic nature — depict the bodies of people who had reportedly fallen onto the roofs of buildings in the Afghan capital from planes they attempted to stow away on.


Exclusive- A clear video (from other angle) of men falling from C-17. They were Clinging to some parts of the plane that took off from Kabul airport today. #Talibans #Afghanistan #Afghanishtan pic.twitter.com/CMNW5ngqrK

“Locals near Kabul airport claim that three young men who were holding themselves tightly in the tires of an airplane fell on top of people’s houses. One of the locals confirmed this and said that the fall of these people made a loud and terrifying noise,” the agency tweeted.

Other footage, apparently taken on the runway of Kabul airport, showed people attempting to cling onto a jet as it taxied down the runway. According to the Guardian, The chaotic and tragic scenes at the airport after the fall of Kabul to the Taliban are likely to become a defining symbol of the west’s failure in Afghanistan.

They follow the evacuation by helicopter on Sunday of the US embassy, and other diplomatic missions, in images reminiscent of the 1975 fall of Saigon. Despite Taliban reassurances that there would be no reprisals against the civilian population, thousands of Afghans on Monday were trying to flee.

The airport – secured by the US military – was the only feasible route out after the Islamist group took control of the country’s land borders. On Sunday evening the Taliban moved into the presidential palace after Afghanistan’s elected president, Ashraf Ghani, fled the country. Access to Hamid Karzai airport, three-mile (5km) from the center of the capital, is now only possible via Taliban checkpoints.