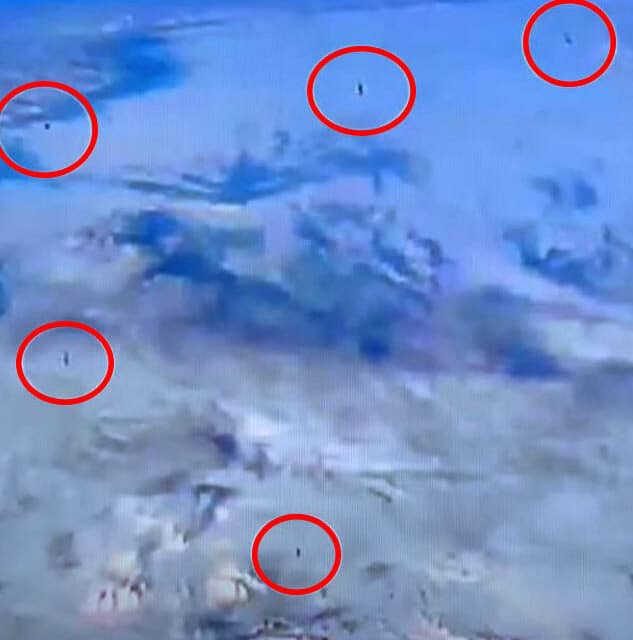 An eagle-eyed space-watcher has spotted at least ten small black objects hovering right below the International Space Station. The conspiracy theorist believes the NASA live feed captured the UFOs forming up in a circle above the Southern Atlantic Ocean.

Footage grabbed from the Nasa live stream from the International Space Station shows the orb-like objects moving past the camera. UFO hunter “Mr. MBB333” shared a screenshot taken by the space watcher captured on Saturday, July 3. He posted the shocking discovery on YouTube, saying:

“This is a screengrab from the International Space Station above the south Atlantic, at around 8.30 am.” “Ten unknown objects travelling with the space station above the planet Earth.” The video prompted UFO fans to dash to the ISS live feed before sharing their thoughts on the objects. One said: “I just checked the ISS cameras and those little specks are still there.”

Another wrote: “What it looks like to me is there’s a whole bunch of Black Knight probes.” Dismissed as a conspiracy theory for decades, ex-US defense officials, sitting politicians, and former presidents Barack Obama and Bill Clinton have all acknowledged there is something unusual going on in our skies.

Speculation among UFO fans has been running rife as lawmakers and officials have hinted at potentially significant information compiled in the classified section of the Pentagon’s landmark report on alien activity. US officials released the highly anticipated public document after giving a secret briefing to Congress two weeks ago — but now everyone is asking, what is in the full version of the dossier? It was commissioned after the Pentagon took the extraordinary step of confirmed a trio of stunning videos showing encounters with pilots – admitting they could not explain the phenomena. READ MORE