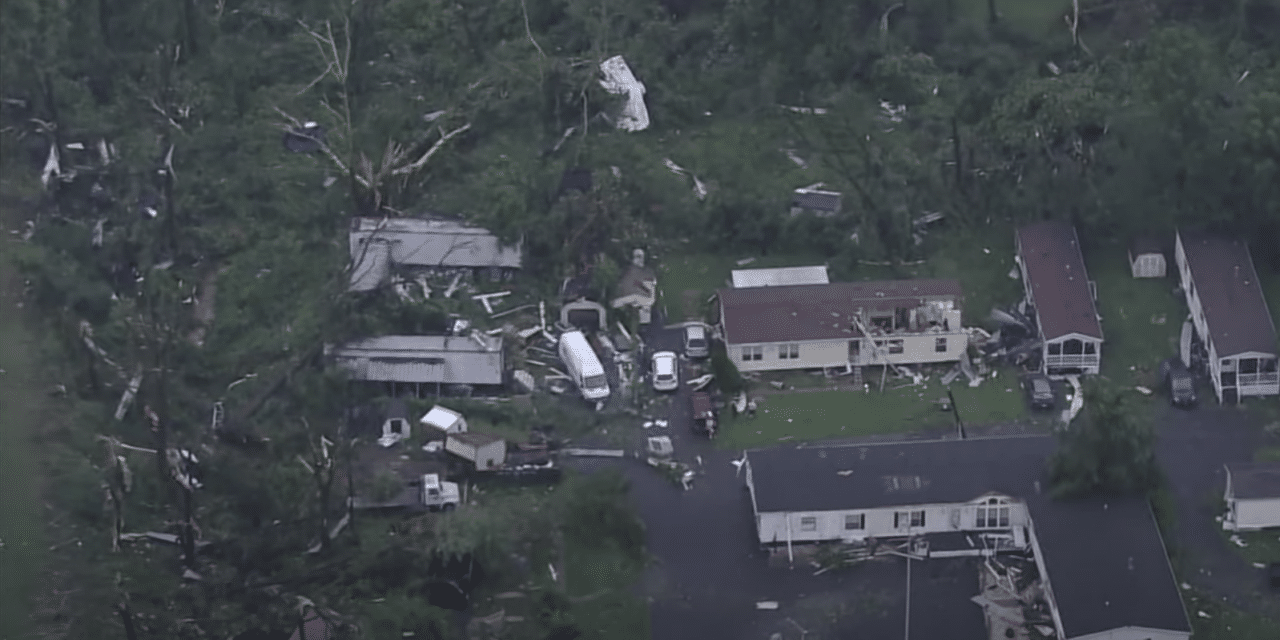 (ETH) – A number of tornadoes have touched down in Philadelphia after multiple warnings were issued by the National Weather Service according to the Express. A “dangerous” twister was spotted at 5.50 pm near Lumberville, Bucks County moving at 25 mph toward Mercer County, NJ.

Another tornado was reported to have touched down near New Hope, Pa around 10 minutes later. Christie Lleto, a reporter for the news channel 6abc, described some of the damage sustained at a car dealership in Trevose, Pa – by what might have been a tornado. She tweeted: “The winds were so powerful it uprooted a utility box, knocked over several light poles smashing cars, and lifted part of the dealerships’ roofs.”

The Weather Channel reported that winds and tornadoes knocked down trees, damaged buildings, and left tens of thousands of homes and businesses without power across parts of the upper Midwest Wednesday night and into Thursday morning.

Looks like a tornado came through Trevose, PA. I hope everyone is ok. #FaulknerVolvo #Trevose #Tornado pic.twitter.com/y683nwmgG6

The weather is being blamed in the death of a man who was killed after his car crashed into a fallen tree and a power line on a highway near the town of Ripon, Wisconsin, about 22 miles southwest of Oshkosh, the Wisconsin State Journal reported, citing the state patrol.

Impacts from the storms stretched from Wisconsin to northeast Illinois, southwest Michigan, and northern Indiana, including the metropolitan Milwaukee and Chicago areas. Wisconsin Gov. Tony Evers declared a state of emergency as damage assessments came on Thursday morning. “Last night’s storms affected communities from the Mississippi River to Lake Michigan, leaving many regions with widespread damage,” Evers said in a news release.

MAJOR DAMAGE: This is on Bantam Ridge in Wintersville where a tornado was confirmed to have touched down. Our reporters are out surveying damage right now. @WTOV9

Severe weather damaged homes, knocked out power, and prompted tornado warnings across parts of several states Thursday evening, including New Jersey, Pennsylvania, Ohio, and Virginia. The National Weather Service said there were reports of injuries from a tornado in Jefferson County, Ohio, just across the state line about 45 miles west of Pittsburgh.

A 911 dispatcher said he was not immediately aware of any injuries, but reports were still coming in. “We’ve got multiple reports of damage and trees and power lines down,” the dispatcher told weather.com just after the storm moved through.