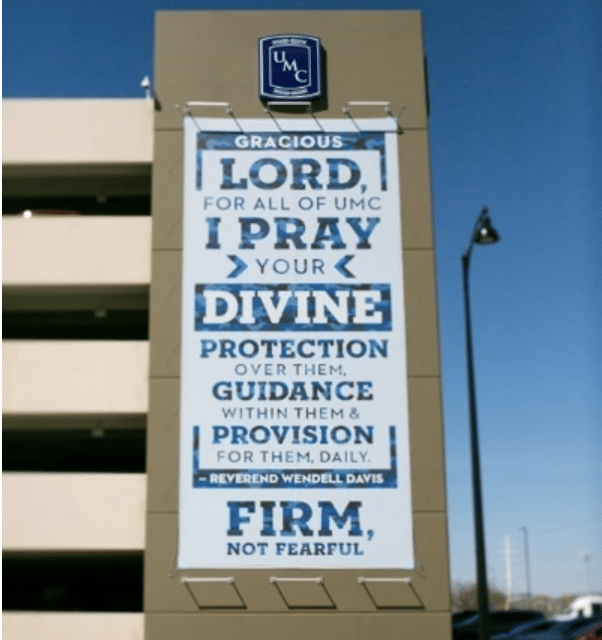 (ETH) – An atheist legal organization has sent a complaint letter to a public hospital in Texas for displaying a large banner at its parking garage asking God for protection and making multiple chaplain videos with Christian content. The hospital says it plans to remove the banner as part of its original plan, saying it was only supposed to be displayed temporarily during the pandemic.

The Wisconsin-based Freedom From Religion Foundation sent the letter late last month to the University Medical Center of Lubbock, demanding that it remove the banner. The banner includes a message attributed to Rev. Wendell Davis of Lyon’s Chapel Baptist Church that reads: “Gracious Lord, for all of UMC I pray Your divine protection over them, guidance within them & provision for them daily. … Firm, not fearful.”

Written by FFRF Staff Attorney Christopher Line and addressed to UMC President and CEO Mark Funderburk, the letter called the banner display “an unconstitutional endorsement of religion over nonreligion.”

FFRF, which pressures government entities nationwide to end any perceived endorsement of religion, cites the Establishment Clause of the First Amendment to the U.S. Constitution, which prevents governments from establishing an official religion. “We urge UMC to recognize its obligation to provide all citizens with an environment free from a religious endorsement by removing this exclusionary display,” wrote Line. READ MORE