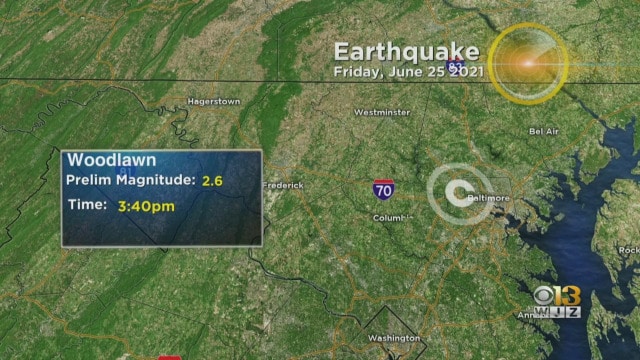 (CBS Baltimore) – A 2.6 magnitude earthquake was reported in Maryland Friday afternoon, according to the US Geological Survey. The epicenter was one kilometer southeast of Woodlawn, Maryland. USGS officials updated their website Friday afternoon to show that the earthquake occurred at 3:40 p.m. at 39.316°N 76.721°W.

It was at a depth of 2.5 kilometers. Governor Larry Hogan said that the Maryland Emergency Management Agency is coordinating with both Baltimore City and Baltimore County and that no major injuries or explosions have been reported.

“And then as I started talking to people they said ‘no, that was a tremor, it was like an earthquake.’” Goode said she’s thankful the tremors weren’t something worse. “It could’ve been worse, it really could’ve been,” said Goode. “But it wasn’t, so I thank god for that.” READ MORE