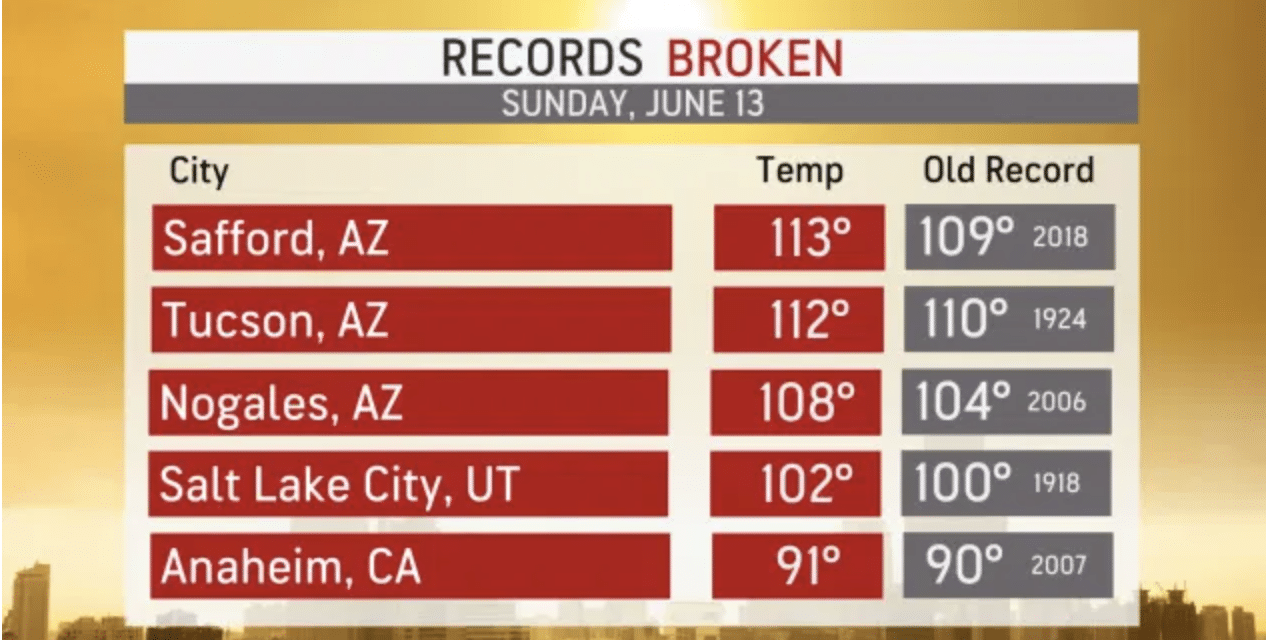 (ETH) – The magnitude of the heat across the western United States through the coming week will be one for the record books, according to forecasters. And it’s not just how hot it will get that will set this particular heatwave apart from others the region has frequently endured in the past — it’s how long it will last.

The hot pattern could set dozens of new daily record highs through the middle of June, in addition to potentially setting new all-time high marks for the month as a whole in some locations.

The intense heat has prompted the National Weather Service (NWS) to issue excessive heat watches and warnings throughout California, southern Nevada, western and southern Arizona, and Utah. Many of these alerts last through Friday, June 18.

The hot air began to build on Sunday with records falling from Arizona and California to Wyoming and Idaho. One of the longest-standing records to be broken was in Salt Lake City, where the mercury rose to 102 degrees Fahrenheit, breaking the date’s record of 100 from 1918. June 13, 2021, is now also the earliest instance of a 102-degree temperature in Salt Lake City, breaking the previous record from June 15, 1974, according to the NWS.

Other record highs fell in Stanley, Pocatello, and Idaho Falls, Idaho; Safford, Tucson and Nogales, Arizona; Rock Springs and Laramie, Wyoming; and Anaheim, California, as highs in the 80s, 90s, and 100s were recorded. Such temperatures are more typical of July and August. AccuWeather meteorologists expect these mid-summerlike conditions to persist as the jet stream bulges northward and keeps the hot air flowing into the region. “The heat will only become more intense through the week,” AccuWeather Meteorologist Mary Gilbert said. READ MORE