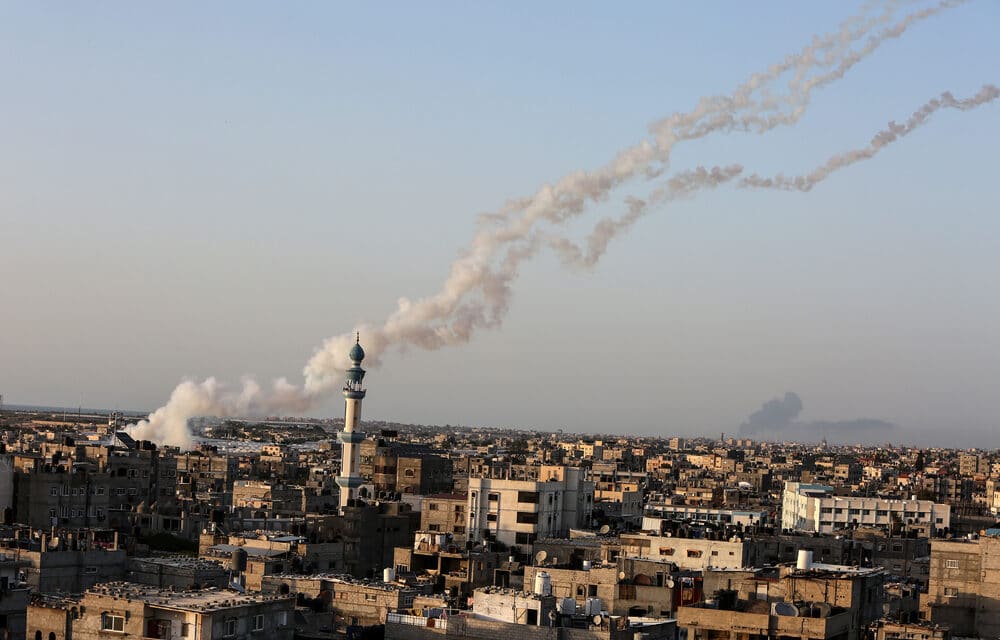 (ETH) – As the war in the middle east continues between Israel and Hamas, a new report is revealing that Israel has now destroyed a tower block that housed news media organizations in Gaza while Palestinian rocket salvoes struck Tel Aviv showing no sign of an end to almost a week of fighting.

According to the Associated Press, Palestinians are calling that over 140 people, including 39 children, have been killed in Gaza since the conflict began on Monday. Meanwhile, Israel has reported 10 dead, including two children.  In the latest strike from Israel, a 12-story block in Gaza City which reportedly housed the U.S. Associated Press and Qatar-based Al Jazeera media operations, as well as other offices and apartments had been struck and destroyed.

Israel also gave an advance warning of the strike so it could be evacuated. The Israeli military later revealed that the building was a legitimate military target because it contained military assets of Hamas, the Islamist group that runs Gaza. The strike was quickly condemned by the AP and Al Jazeera, While the US told Israel “that ensuring the safety and security of journalists and independent media is a paramount responsibility,”

Israeli Prime Minister Benjamin Netanyahu also told U.S. President Joe Biden via a phone conversation that Israel is doing everything to avoid harming non-combatants in its fighting with Hamas and other groups in Gaza. Meanwhile, thousands of protesters across London and Madrid were seen in the streets marching in support of Palestinians on Saturday as the worst violence in years continues between Israel and militants in Gaza.

In London alone, several thousand protesters carrying placards reading “Stop Bombing Gaza” and chanting “Free Palestine” converged on Marble Arch, near the British capital’s Hyde Park, to march towards the Israeli embassy. While, in Madrid, over 2,500 people, many young, wrapped in Palestinian flags, marched to the Puerta del Sol plaza in the city center. “This is not a war, it’s genocide,” They chanted.

“They are massacring us,” said Amira Sheikh-Ali, a 37-year-old of Palestinian origin. “We’re in a situation when the Nakba is continuing in the middle of the 21st century,” she said, referring to the “catastrophe” word used by Palestinians to describe Israel’s creation in 1948 when hundreds of thousands fled or were driven out. “We want to ask Spain and the European authorities not to collaborate with Israel because, with their silence, they are collaborating,” said Ikhlass Abousousiane, a 25-year-old nurse of Moroccan origin.