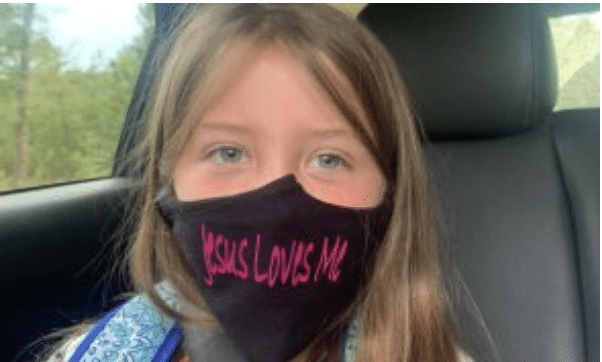 (OPINION) ETH – A third-grader attending a public school has be told to remove her mask that says “Jesus Loves Me” because it could be deemed offensive while allowing other students to wear BLM masks.

The report reveals that Alliance Defending Freedom (ADF) is currently representing and fighting for the girl’s right to wear the mask in her school. The report reveals that Tyson Langhofer, who is the ADF senior counsel, told the Todd Starnes Radio Show on Thursday that the school district engaged in “viewpoint discrimination” by singling out Lydia Booth back in October while allowing other students to wear “Black Lives Matter” masks.

The report details that the young girl was saddened on Oct. 13th, after her principal at Simpson Central School reportedly pulled her aside and told her that she could no longer wear her “Jesus Loves Me” mask, which she’d worn several times.

The girl’s mother, Jennifer Booth, was informed by the school that the mask apparently violated school policy because it had words on it, but Booth stated that she noticed it was not listed in the policy.

The superintendent followed up by informing her that the mask violated their policy banning masks with political, religious, or inappropriate symbols. Lydia claims that the school allegedly changed its policy to justify the move and refused to accommodate. “We were forced to file a lawsuit in order to just allow this third-grader to just express this positive message to the students around her that Jesus loves me,” Langhofer said. ADF has since, filed a federal lawsuit against the Simpson County School District.