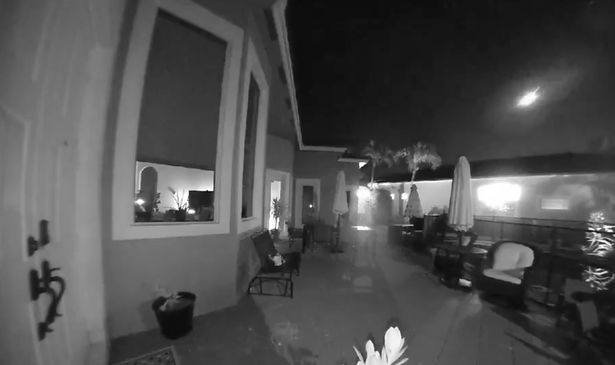 (ETH) – An asteroid was seen blazing across the skies of Florida by hundreds of residents before emitting a mysterious flash of light. the event reportedly took place around 10 pm on Monday night.

The event was even captured on a home security camera that was shared on Twitter that revealed the bright object hurtling towards Earth, gradually lighting up the sky with a flash of bright light where it is then seen disappearing into the dark sky.  The resident who captured the event stated: “Just saw this in the sky from Parkland at 10:16 PM #meteor.”

Other videos were also shared on social media with residents sharing their sightings from their dash cameras and mobile phones. Even a CBN News Journalist captured the event while reporting live on television.

Journalist Jay O’Brien shared the video of the event on his Twitter account, where he is seen on the street covering a story on an affordable housing complex full of seniors who claimed they lost power yesterday and will likely go to bed without it tonight.

It was then he was suddenly startled by the huge fireball, and pauses and says: “Oh my God, what is that in the sky? Woah, okay! “Big piece of flash in the sky just there. Possibly a big piece of space junk burning up in orbit.” He captioned: “Big flash and streak across sky in West Palm Beach.

Happened moments ago while we were on Facebook Live for a CBS12 story. “It’s a chunk of an asteroid.” The event was documented by the American Meteor Society who reported more than 160 testimonials of a “bright exploding fireball” in the regions of Florida and the Bahamas. Meteorologist Zach Covey said the fireball was likely a chunk of an asteroid known as 2021 GW4 and measured roughly 14ft long at about the size of a car, was scheduled to make an extremely close approach of only 16,000 miles.