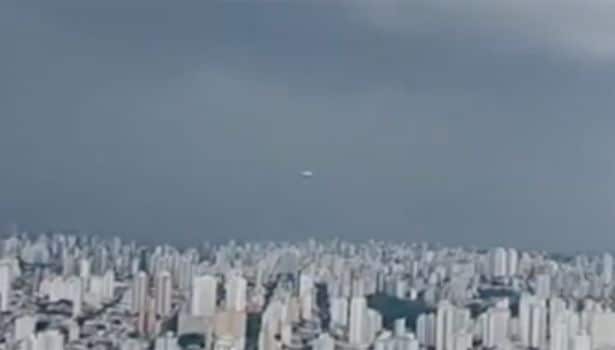 (Daily Star) – Aerial footage from Sao Paolo in Brazil appeared to capture a mysterious shape hurtling across the skies during a storm, which viewers of news outlet Brazil Urgente were quick to spot.

Astonishing footage appearing to show a silver UFO hurtling across the overcast sky has been spotted on a live TV report. Thousands of people noticed the mysterious shape appearing on a news segment from Sao Paolo, Brazil, last week and multiple conspiracy channels have covered it on YouTube.

In the clip, a Brazil Urgente reporter is heard speaking about a storm hitting the city when the object appears to the right of the screen. It hurtles across the screen in a straight line and is gone within 10 seconds. Among the YouTubers to have noticed the baffling sighting was The Hidden Underbelly 2.0.

“We have this object that doesn’t seem to have any wings, it looks stone-shaped. The way this thing is moving is incredible. “It doesn’t seem to be a plane, a blimp doesn’t move that fast, and judging by the buildings below this is a huge object. READ MORE