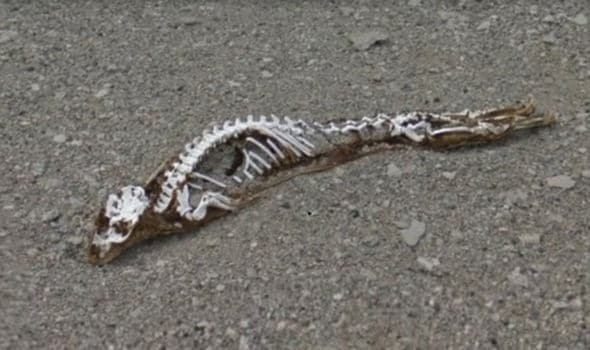 (OPINION) ETH – Ice that has melted in Antarctica has revealed the skeletal remains of a mysterious creature, sparking claims that the creature found on Google Maps could be a “dinosaur frozen in time”.

According to the report from Express, The mysterious skeleton has been discovered on Google Maps in Antarctica in a video titled: ‘Antarctica Melting Ice MAY have revealed ANCIENT skeletal remains fully INTACT! Rare find’ that has gone viral with over 300,000 views.

According to YouTuber Michael Bradbury, who hosts the conspiracy channel MrMBB333, is suggesting that the skeleton remains indicated a dinosaur that had been preserved in the Antarctic ice. The video has sparked fierce debate among conspiracy theorists online.

The near-perfect skeleton remains were located in a remote inland area of Antarctica. Youtuber MrMBB333 host told viewers: “What you’re about to see here is intact, very large skeletal remains. “I would guess this is somewhere in the region of 15 to 20ft. It’s intact.” He added: “I don’t know if this recently thawed and this has been frozen for thousands of years or if this is something new.

“This could be very, very old, going back to prehistoric Antarctica. “Antarctica is a very mysterious place. It could be an old dinosaur. It could be a lot of different things. “I know there are seals in Antarctica but I don’t know how they would get 50 miles inland.” The YouTuber added:

“I think this thing was frozen in time. I don’t think it’s a sea lion.” He then goes on to give an analyzed description of the skeleton, before concluding that it could be an ancient dinosaur showing the creature’s front and rear limbs, as the curve of its spine and its skull.

Not everyone is convinced of this theory as sceptics were quick to claim that the remains look like a seal with one user saying: “What looks like hands, fingers and feet and toes are what’s hidden in its webbing.” Another remarked: “Google search for images of seal skeleton shows a pretty good match.” However, others supported the ‘ancient creature’ claims, adding: “It looks like an alligator skeleton, definitely some type of reptile that walks on land.” One viewer noted: “Seals don’t have back legs.”