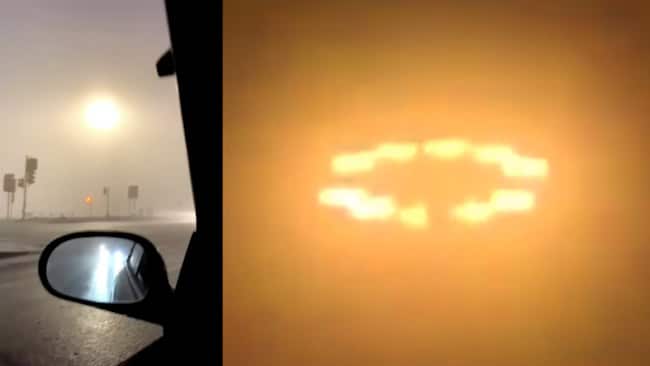 (OPINION) ETH – There has been a slew of  UFO sightings that have taken place over the past few weeks across a span of locations from Ohio, Florida, California, North Carolina, Colombia, and Thailand but there was one sighting in particular that hs even one expert convinced that it was a “close encounter”.

The sighting reportedly happened over Fargo, North Dakota on January 9th according to a report from BroBible. An eyewitness who captured the glowing ring-like UFO on video stated: “I finished work at 7:20 a.m. and as I sat at the stoplight I saw this glow in the fog. I took out my phone to take a video.

The lights just sat there, not moving an inch.” The report even captured the attention of MUFON. Who stated:  “This UFO report just came into MUFON today. A guy was driving home from work when he saw some strange pulsating lights up ahead. The lights didn’t fly away but were hovering in place in the fog.

From what I see when I slow down the video, there is a black thick disk at the center of these lights. So it is a UFO and it is hovering in place. It’s possible what this person was witnessing was a close encounter with a UFO that had just landed and had aliens disembark to study the inhabitants of this small town before they woke up.

Wow, just an amazing encounter…I only wish he had stopped the car and gotten out to record more, but I’m sure fear played a part in him driving off.”