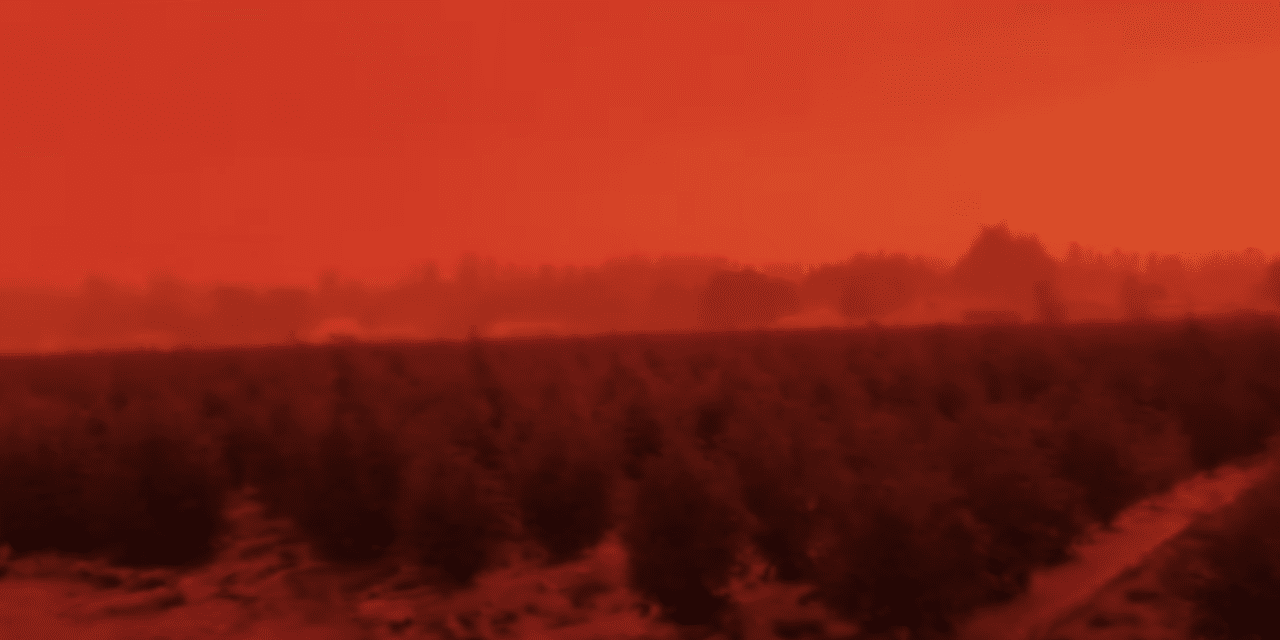 (ETH) – Raging wildfires in Oregon have turned skies blood-red as wildfires caused by felled power lines continue to ravage the region. A recent video that was shared from Twitter reveals the skies as glowing red in color in the city of Stayton that some are saying looks like something that resembles a science fiction movie.

A journalist named Christine Pitawanich from KGW 8 a local affiliate, is heard in the video saying: “This, right here, is downtown, Stayton. “You can see the red hue, the red-orange glow in the sky. There is ash, falling visibly in front of the headlights of the car.

“But downtown, basically, empty here beside a few people walking around. “The smell of smoke is heavy and Exit 13 on highway 32 is where a roadblock is, so you can’t go any further than that. “This is what downtown Stayton looks like, right now, at 12:22 pm.”

Oregon’s Governor Kate Brown warned that the wildfire is “proving to be an unprecedented and significant fire event for our state”. that has already scorched an estimated 200,000 acres of land. The governor has already declared an emergency as tens of thousands of residents are facing a mandatory evacuation in what is being deemed a “Once in a generation event”.

Governor Brown tweeted: “People’s homes, lives & land are at risk,” “If you are in an evacuation area, please pay close attention & listen to local calls to evacuate – this can save your life & the lives of our firefighters.” These devastating wildfires have reportedly reduced entire towns to ashes as “unprecedented” blazes fuelled by a “heat dome” and 14,000 lightning strikes continue to ravage the United States.

These fires, which began in California on Friday following a record-breaking heatwave have now spread up the West Coast, burning homes to the ground and leaving a path of devastation in their wake. California Governor Gavin Newsom called this event the “largest fire season we’ve had in recent recorded history” as he declared a state of emergency.

Forest Service regional forecaster Randy Moore warned the fires are expected to get worse. and warned:  “The wildfire situation throughout California is dangerous and must be taken seriously,”  “Existing fires are displaying extreme fire behavior, new fire starts are likely, weather conditions are worsening, and we simply do not have enough resources to fully fight and contain every fire.”

Not only are the wildfires across Northern California leaving a massive layer of smoke over the San Francisco Bay Area, but vehicles, yards, and homes are being covered with layers of ash from the fires as well resembling what some say is “apocalyptic” scenes as more than 2 million acres have been completely scorched in a series of wildfires with the Bear and Creek fires currently raging to the east of the San Francisco Bay Area. Smoke from the blazes had covered Wednesday morning with a layer of darkness.