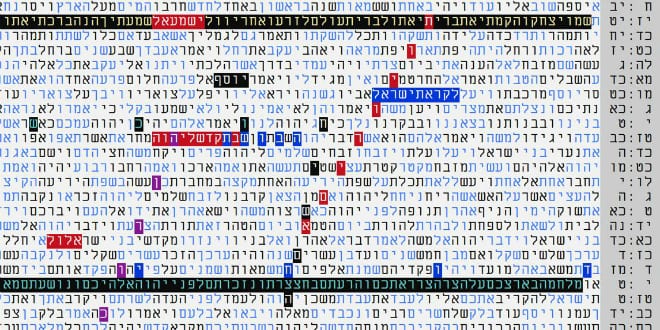 (OPINION) ETH – An alleged “Bible Code Expert” named Rabbi Mattityahu Glazerson has come out recently and claimed that within just hours after the newly-minted peace agreement between Israel and the United Arab Emirates was announced, he was able to discover what he called “the best appearance” of the Hebrew word ichud which means unity and the Hebrew for Emirates.

“It’s unbelievable. It came once in the Torah in a significant way,” he noted. Glazerson claims he found the codes where God told Abraham that Isaac would be born to him and Sara and that, though Ishmael (the Biblical ancestor of Arabs) would be blessed with material prosperity and large populations, God’s covenant would remain eternally with the descendants of Isaac (the Jewish nation).

Then God said: “No, Sarah your wife shall bear you a son, and you shall call his name Isaac; I will establish My covenant with him for an everlasting covenant, and with his descendants after him. And as for Ishmael, I have heard you. Behold, I have blessed him, and will make him fruitful, and will multiply him exceedingly. He shall beget twelve princes, and I will make him a great nation.
– Genesis 17:19-20

The rabbi claimed that 840, which is the numerical value of shematicha (I have heeded you), corresponds to the number of years the Arabs would have control of the Land of Israel. This word appears in the Hebrew in Genesis 17:20. BIN states:

“In other words, embedded in the Hebrew is a promise that God will bless Ishmael’s descendants with dominion over the Land of Israel for 840 years. We find this hint in the exact verse where God promises Abraham that, although the eternal covenant rests with Isaac and his descendants, the descendants of Ishmael will also benefit from Divine favor.”