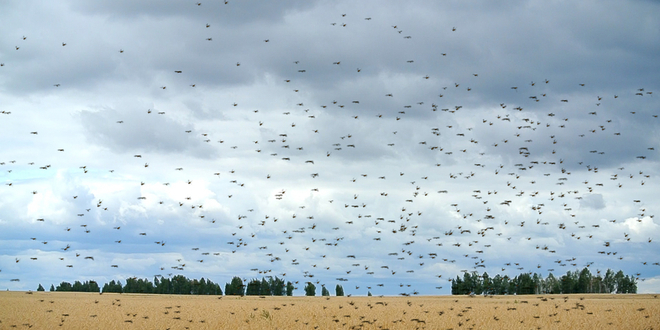 (BIN) – Iranian leaders have threatened Israel and the US countless times but fulfilling those threats will have to wait as their army currently has its hands full battling a swarm of locusts attacking the Islamic republic for the second year in a row.

Southern Iran is being infested for the second year in a row by a huge swarm of locusts described as the worst in decades. The infestation is only the newest threat in a wave of troubles that has hit the country that has threatened Israel and the US countless times.

This happened in Egypt too, thousands of years ago, when Pharaoh messed with the God of Israel. pic.twitter.com/neY5f7yOgE

Iran is was hit particularly hard by the coronavirus and the pandemic also led to oil prices plummeting to record lows, adding financial woes to the countries list of troubles. Economic sanctions led by President Trump multiplied the impact.

Mohammad Reza Mir, a spokesman for the ministry’s Plant Protection Organization (PPO), said the desert locusts attacked more than 494,000 acres of orchards and farmland in seven of Iran’s 31 provinces, the semi-official news agency ILNA reported, threatening to destroy crops worth more than $7 billion.

“The military has promised to help fight the desert locusts, including by providing all-terrain vehicles for use in areas which are hard to access,” Mir told ILNA. “Last year the military provided personnel and vehicles, and that was a big help.” READ MORE