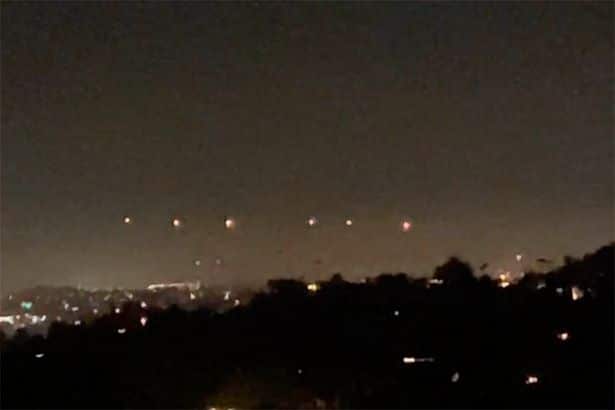 (Daily Star) – An unusual line of lights has been spotted hovering in the sky with witnesses from both the US and Mexico witnessing the phenomenon.  According to reports, Several witnesses have shared their videos online from the sight that occurred on March 31st.

One video, that uploaded to the Mutual UFO Network, showed four orbs appearing to change color above Laguna Beach in California then another light then appears as the objects hovering in a perfect line. Another 80 miles down the coast, another video emerged of the same lights over San Diego.  Again, the lights seemed to hover in a straight line before slowly disappearing one by one.

However, it wasn’t just Californian residents that witnessed the lights, Another 40 miles south of San Diego, in the Mexican city of Playas de Tijuana, a third video surfaced of seven mysterious objects hovering in the same formation. These videos were all shared online by the YouTube conspiracy channel The Hidden Underbelly. He wrote: “These lights seem to appear out of nowhere and were visible for about 15mins before disappearing one by one, leaving the witnesses puzzled and entertained by the aerial display performed by these orbs.”